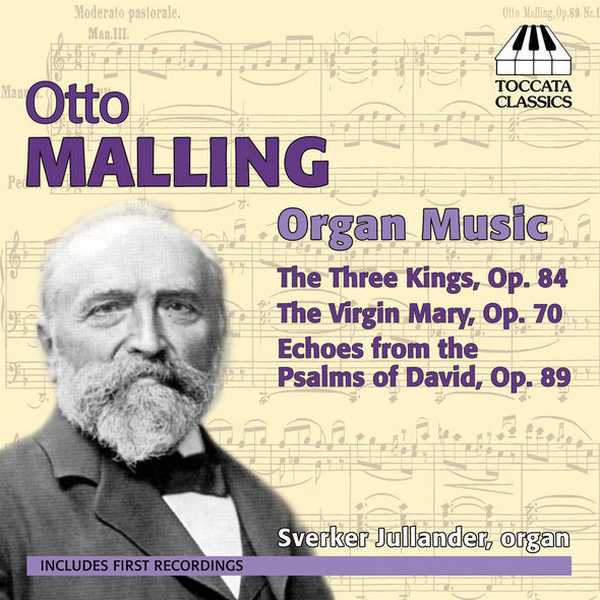 Die heilige Jungfrau (The Virgin Mary: Mood-Pictures), Op. 70
08. I. The Annunciation
09. II. Mary visits Elizabeth and praises God
10. III. The Holy Night
11. IV. Jesus is presented in the Temple, where Simeon and Anna speak about him
12. V. Mary finds Jesus among the Teachers in the Temple during the Passover Feast
13. VI. At the Foot of the Cross

Otto Malling (1848–1915) was a central figure in Danish musical life, as composer, conductor, pianist, organist, administrator and teacher. His substantial output of organ music was cast in the form of eleven suites of ‘mood pictures’ inspired by the Bible. The range of emotions it encompasses is correspondingly wide, from the languidly romantic to the fierily epic, in a language which is at all times dignified and direct.

Two of the three suites on this CD have never been recorded before.

Sverker Jullander is Professor of Musical Performance at Piteå School of Music, Luleå University of Technology, Sweden. His previous recording for Toccata Classics features the complete Bach transcriptions of Sigfrid Karg-Elert (TOCC 0111), which the reviewer for MusicWeb felt was ‘performed with distinction’.

The organ of the Vasa Church, Gothenburg, was built in 1909 by Eskil Lundén (1881–1945) and is ideally suited to north European late-Romantic music. In 1943 the organ was rebuilt by Olof Hammarberg under the influence of the Organ Reform movement and, in the same spirit, a Ruckpositiv was added in 1952 by the same builder. In 2001–2 the organ was again rebuilt by the firm of Grönlund, Luleå.