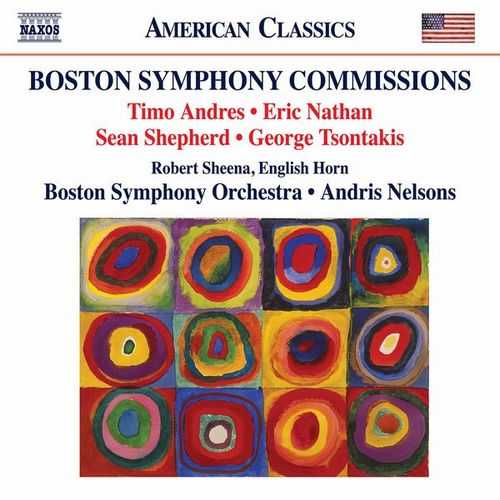 Timo Andres
06. Everything Happens So Much

Sean Shepherd
Express Abstractionism
07. I. Dense Bubbles, Calder, The Origin of Life on Earth
08. II. Richter, The Rainbow Inside a Bolt of Lightning
09. III. Kandinsky, and Marble, and Krasner
10. IV. The Sun, The Moon, Mondrian

Big orchestras often like to enlarge their repertoires. The Boston Symphony orchestra is no exception and has always taken on new scores, in particular those of American composers (Aaron Copland, Elliott Carterm etc.). Today, it’s Eric Nathan, George Tsonkatis, Timo Andres and Sean Shepard’s turn to become part of the family. Eric Nathan kicks things off with a hair-raising piece that synthesises all of the best things from the 20 th century. The title, The Space of a Door, is borrowed from Beckett. The image that he conveys is an illustration of record’s thunderous beginning: a door opens only to be engulfed by a sonic tornado that slips away and dissipates to better ease our ears into the record.
We are met by a very French-sounding dreaminess as George Tsonkatis’ Sonnets somewhat resemble Debussy’s Rhapsody for Saxophone and the melisma of some mythical Orient. A score well- suited to Robert Sheena, the historical English horn of the Boston Symphony Orchestra. In Timo Andres’ Everything Happens So Much, the orchestra now teems with the repetition of the initial motif. Such “swarm-like” writing gives way for sequences that are more harmonic and spread-out in temporality. The orchestra again progressively begins to stir, and the writing becomes more “striated”.
Finally, Sheperd’s four pieces dissolve into many different sonic portraits of artists. The first movement (Dense Bubbles – The Origin of Life on Earth) is inspired by Calder. He makes use of the percussion stands, among others, to give the illusion of suspended objects, Calder’s famous mobiles.
These little melodic scraps develop into a pointillist background of sound. The fourth movement (The Sun, The Moon) relates to Mondrian and represents more vertical writing and refined harmonies that unravel into a rather contemplative discourse.
At the head of the Boston Symphony Orchestra, Andris Nelsons is a delight. These scores are dream territory for a conductor that loves textures and contrasts such as he. We love him all-the-more in these younger repertoires! © Elsa Siffert/Qobuz

The Boston Symphony Orchestra has a long tradition of commissioning and performing important new music, and the four work on this album were commissioned and premiered by the orchestra and its conductor Andris Nelsons during the first years of his tenure. Eric Nathan takes us on a journey through a series of interconnected worlds, whereas George Tsontakis marks the 400th anniversary of Shakespeare’s death in a series of Sonnets for English horn and orchestra. Timo Andres carries on ‘conversations’ with composers of the past, while Sean Shepherd has been inspired by five giants of artistic modernism.