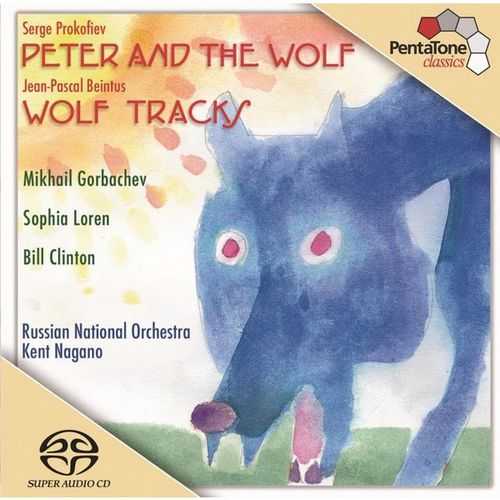 This is just goofy enough to be a lot of fun. The project originated with the Russian National Orchestra and its conductor, Kent Nagano, who spent time in California and there developed a reputation for innovative programming. Here, Prokofiev’s classic tale of Peter and the Wolf is paired with a modern take on the story, with new music by the French composer Jean-Pascal Beintus and narration by none other than Bill Clinton. Former Soviet leader Mikhail Gorbachev, a patron of the orchestra since the days of its founding as Russia’s first modern symphonic ensemble free from government control, introduces the project on the disc and reads (in Russian, followed by English translations) a short intermezzo and conclusion emphasizing the need to conserve wildlife habitat. Several things need to be said here, one of which is that if you’re looking for a good recording of Peter and the Wolf, you might do well to consider this one even amid all the competition out there — Sophia Loren is an absolutely delightful narrator. It’s easy to imagine her performance becoming a treasured keepsake of a child’s. Clinton is no Sophia Loren, and apparently if you’re the former President of the United States no one tells you when you mispronounce “bravado.” But he’s always good for a smile. And finally, the modernized Wolf Tracks, which features the grandson of the original Peter setting off to track the wolf but becoming convinced of the error of his ways, would be less likely to make someone into an environmentalist than would Prokofiev’s original work, with its marvelously evocative natural scenes. Proceeds from the disc are being donated to charities selected by the narrators and to the Wolf Conservation Center.