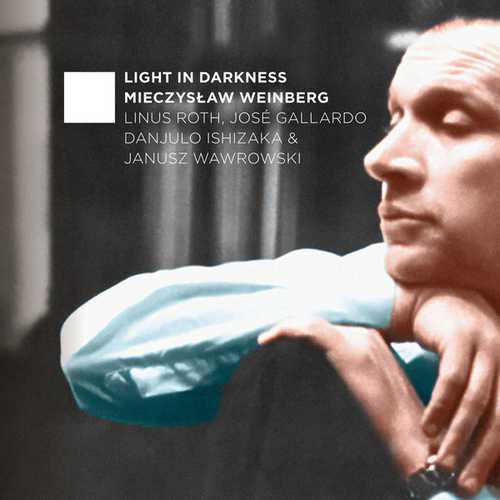 Songs Without Words for Violin and Piano
08. I. Andantino
09. II. Larghetto

Linus Roth first encountered the music of Mieczysław Weinberg (1919-1996) in 2010 when he was scheduled to play his Piano Trio at a chamber music festival. After the first rehearsal, Roth was shocked and moved by the intensity and energy of the music and touched by the beauty of this composition, which was new to him. Not only were the characteristics of the inner turmoil obvious – , the deep abysses and darkness in this music – but also those of the hope contained therein, which repeatedly shone through. At the time Roth knew almost nothing about Weinberg’s biography or any of his other works, so he left the festival in the hope that Weinberg may have composed something else for violin.

It was then that a treasure chest opened up for Roth: a Violin Concerto with symphony orchestra and one with chamber orchestra, 3 solo Sonatas, 7 Sonatas with piano, many other pieces and a number of chamber music works. Much of it had never been recorded and Roth immediately saw the discovery of this music as a huge stroke of luck. As a musician, when do you ever get to discover an entire oeuvre that is first-rate and yet has been forgotten?! The idea was obvious to tackle the complete recording of all works for violin. As this project has meanwhile been completed, Roth wanted to return here to his first encounter with the music of Weinberg, the Piano Trio, Op. 24.

Until shortly before his death in 1996, Weinberg’s works were regularly performed with great enthusiasm by Russian artists and now, they slowly but increasingly are reaching the international concert stage. His Piano Trio, like his other numerous works, shows his immense mastery of all compositional forms, genres and styles – always shaped by events in his own fateful life, such as escape, expulsion, the murdering of his family and the constant danger to his own being.