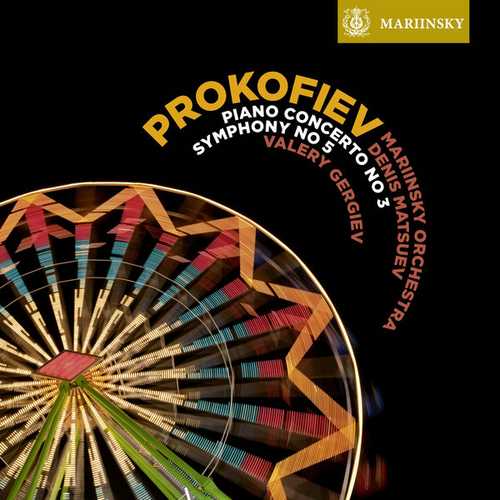 The Mariinsky label presents the recording of two of Prokofiev’s most popular works, Piano Concerto No 3 and Symphony No 5. Denis Matsuev features as soloist, in this his fourth recording on the Mariinsky label. Since winning the 11th International Tchaikovsky Competition in 1998 Matsuev has established a reputation as one of Russia’s leading pianists and is renowned for his interpretations of Russian music. His recordings of Rachmaninov’s Concerto No. 3 Shostakovich Piano Concertos 1 & 2 and Tchaikovsky’s first two piano concertos, have all received considerable acclaim.

Written at the height of World War II in 1944, Prokofiev’s 5th Symphony was intended as “a hymn to free and happy Man, to his mighty powers, his pure and noble spirit.” The symphony’s character was inevitably determined by the time and circumstances of its composition. It would be a patriotic work, big, heroic and ultimately optimistic; it would be a symphony of mass appeal. “I thought of it as a work glorifying the human spirit”, wrote Prokofiev.

Prokofiev wrote five piano concertos but it is his third that has gained the most popularity. It remains one of his most popular pieces and the qualities of clarity and vitality that appealed to the work’s original audiences are apparent almost immediately the work begins. It is no surprise this remains his most frequently performed piano concerto.

Denis Matsuev will be touring throughout the world in 2014. In February he will appear at the closing ceremony of the Sochi 2014 Winter Olympic Games, alongside Valery Gergiev, followed by a series of concerts in Spain, presenting Rachmaninov’s Piano Concertos and Prokofiev Sonatas. In March and April Matsuev joins the London Symphony Orchestra and Valery Gergiev for a European tour, with concerts in London, Paris and Turin.