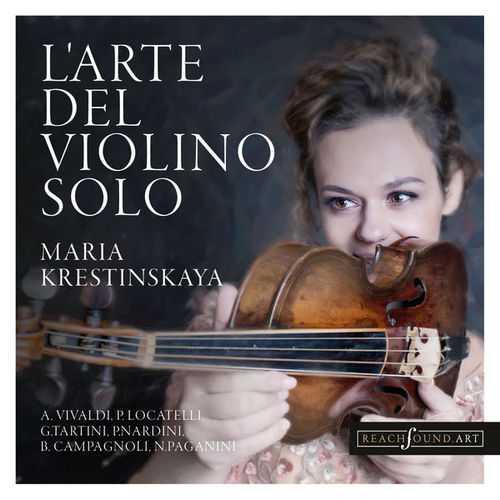 Pietro Nardini:
05. Capriccio No. 1 for Solo Violin in C Minor

Bartolomeo Campagnoli: Preludio “Capriccio” No. 1 for Solo Violin in F Minor:
06. No. 24, Presto

New album of Maria Krestinskayahe “L’arte del Violino Solo” is an entire journey taking the listeners from the early baroque trough to the romantic era. Its essence lies in gradual movement from the early days through to the development and golden age of the virtuoso style that originated in Italy around the first third of the 18th century and has steadfastly survived to this day. This style inspired the great composers and violinists of the past to search for new approaches and master most intricate violin techniques. As a result, we are able to enjoy compilation albums of virtuoso Capriccios (meaning “a fantasy” or “a fancy frill” in Italian), each of them being a self-sufficient piece helping musicians of all times perfect their performance and skill. Every Capriccio has its main theme, a sophisticated element gradually going from simple to complex throughout the piece. Hence, there is no choice but to master and perfect the technique while playing. In 19th century such form of music became widely known as études. It should be noted that in the 17th century Capriccios were mostly viewed as fantasy pieces with little or no focus on complexity.

The program aspires to take the listeners through the development and evolution of the form and substance, the choice of music focuses on continuity with all the pieces having something in common and combining into a dramaturgic and meaningful action. Metamorphoses emerge as we move from piece to piece, a longer bow, a higher pitch, more and more demanding and emotionally elevated performance; however, the main character remains the same – her majesty the violin.

Three different violins with bows to match have helped to maintain the performance authentic throughout the program. The first one is an authentic baroque violin made in 1627 by Jovanni Paolo Maggini and tuned to 415 Hz. This violin is the best for performing Locatelli’s Capriccio and Tartini’s Devil Trill. The second violin is a classic instrument made in 2019 by Alexander Rabinovitch, one of the best violin makers of our time, and tuned to 430 Hz. The instrument has a deep and vibrant tone required for classical music and it sounds perfect with gut strings and in tandem with a bow to match made by Eugene Ivanov in 2017. The third violin is a modern instrument carefully assembled by Alexander Rabinovitch in 2011 and tuned to 440 Hz. Being extremely demanding in terms of sound quality and intonation, Paganini’s music dictates some delicate attention to the instrument, especially when one uses gut strings. This violin is perfectly capable of demonstrating all the illustrious brilliance of Paganini’s variations while also keeping its own gentle and romantic tone. For the “Nel Cor piu non mi Sento” variations I have chosen a bow after Tourte specifically made by Alexander Rabinovitch in 2019. All the three violins complement each other flawlessly creating varied and complex acoustic effects.