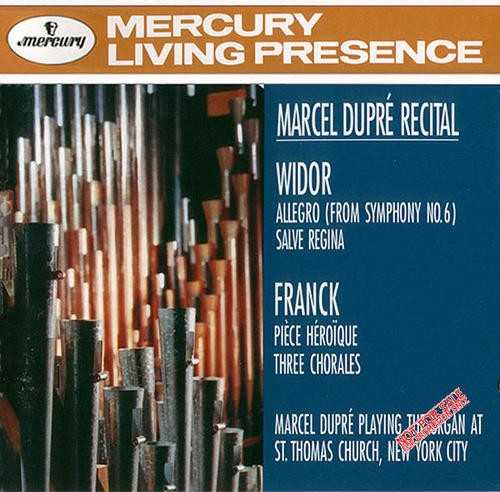 This is a remake from an old 33 rpm recorded in 1957 and it’s sure worth the price! Marcel Dupré, French organist of the beginning of the 20th century was well known in United States because of its frequent trips in America.

Recorded at Saint-Thomas Church in New-York, the repertoire is far from an eclectic one : only classics from Franck’s three Chorals and C.M.Widor, Allegro. The highlight of this Cd is certainly the Salve Regima, from Widor. Bright and meditative at the same time, this piece is to my point, the climax of the Cd, after the Chorals from Franck.

Few little mistakes of and on, but who will complaint? After all, Dupré is at the tribune!

In short, a masterpiece for those who like prestigious organ player and the talent of a great composer at the tribune of Saint-Thomas’ organ, playing the most beautiful repertoire of French composers.

previousHanson Conducts McPhee: Tabuh-Tabuhan; Sessions: The Black Maskers; Thomson: Symphony on a Hymn Tune, The Feast of Love (APE
nextDvorák – Symphony no.9 “From the New World”, Sibelius – Symphony no.2 (APE)