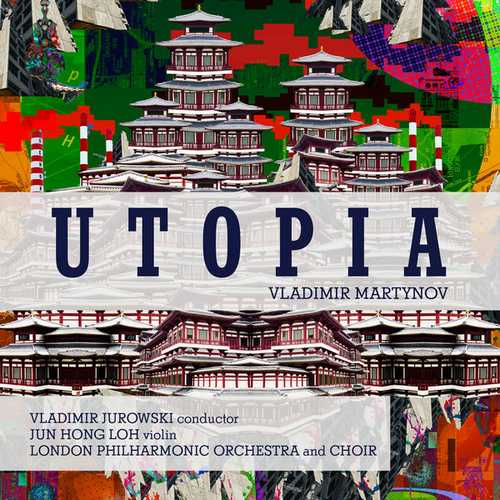 This is the world premiere recording of Vladimir Martynov’s Utopia Symphony. It was adapted from his 2005 symphony, originally titled Singapore: A Geopolitical Utopia. It was recorded in the presence of the composer at Abbey Road in November 2019.

The Symphony was written to celebrate Singapore and was originally commissioned in 2004 by former Ambassador to Russia, Michael Tay. The libretto has been adapted from passages of the Tao Te Ching and seeks to reimagine the concept of utopia.

Vladimir Martynov comes from the Russian avant garde of the 1970s and his musical style fuses elements of American minimalism and Russian Orthodox chant, which is perfectly exemplified in this symphony.

The London Philharmonic Orchestra has a strong reputation for performing music by contemporary composers. The Orchestra performed the world premiere of Martynov’s opera Vita Nuova in 2009. Other contemporary works on the LPO Label include the Sky Arts Award-winning premiere performance of Julian Anderson’s The Discovery of Heaven, Jennifer Higdon’s Percussion Concerto (the recording of which was inducted into the Library of Congress Recording Registry for 2019) and the world premiere production of Ravi Shankar’s opera Sukanya.