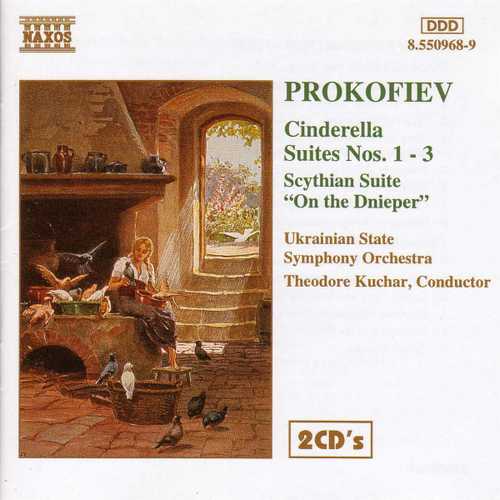 Sumptuous and tender-hearted, voluptuous and exquisitely beautiful, Theodore Kuchar and the Ukrainian State Symphony Orchestra’s 1994 recording of the three suites from Prokofiev’s ballet Cinderella could only be improved if there were more of it. And the only way there could be more of it would be if Kuchar and the U.S.S.O. had recorded the whole ballet. But not only are the excerpts extremely well played and supremely persuasively interpreted, they each make sense in context of the suites so that each suite forms a compelling whole rather than a collection of concert hall favorites. Besides, if Kuchar and the U.S.S.O. had recorded the whole Cinderella ballet, there wouldn’t be room on the second disc for what the English so charmingly call fillers. And the fillers are just as fine in their way as the Cinderella suites are in theirs. Kuchar and the U.S.S.O.’s Scythian Suite is the first recording of the work that makes it sound lovely and lyrical, or at least as lyrical and lovely as such an ungainly and awkward work could ever sound. And Kuchar and the U.S.S.O.’s suite from On the Dnieper is far and away the most polished, passionate, and compelling performance of the work ever recorded, which would probably be true even if there were more than two other recordings of the work. Naxos’ sound is superb: clear, warm, and immediate.