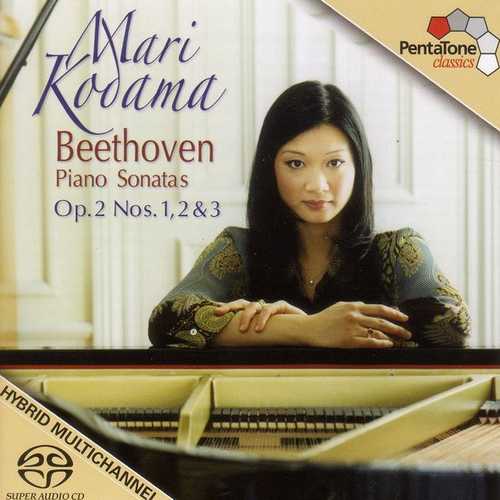 Born in Osaka, raised in Paris, educated at the Conservatoire National in Paris, and a student of Tatiana Nikolayeva and Alfred Brendel, Mari Kodama certainly has a distinctive pedigree. And with this, her fourth disc in a planned cycle of all Beethoven’s sonatas, Kodama makes her bid to compete with her illustrious teachers. But while one cannot fault her polished technique or emotional playing, Kodama’s Beethoven is not yet ready to join benchmark recordings by Schnabel, Kempff, Brendel, and others on the top shelf. Kodama’s chosen repertoire is taken from the earliest of Beethoven’s published sonatas, the three from Opus 2, but she plays them with an interpretive weight more appropriate to the more substantial later sonatas. The opening F minor Sonata has the relentless strength of the Tempest Sonata in its closing Prestissimo, the central A major Sonata has the unflagging intensity of the Appassionata Sonata in its central Largo, and the closing C major Sonata has the emotional weight of the Waldstein Sonata, especially in its ecstatic conclusion. These are fine qualities on the surface, but the relatively light content of the early sonatas does not yield them naturally, and Kodama appears to be reaching to create weight and solemnity where elegance and wit might be more appropriate. Super audio digital sound puts Kodama and her Steinway in the room with the listener.