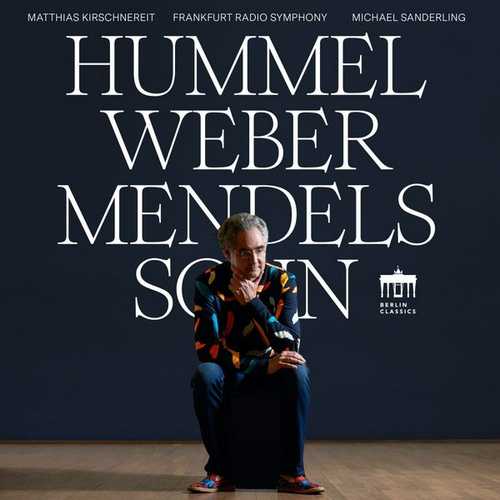 Matthias Kirschnereit and the hr-Sinfonieorchester under Michael Sanderling have compiled a compelling, captivating programme of music from the last days of the Classical era, on the cusp of the Romantic. This “half-way house” – in the best possible sense – accommodates the compositions of Johann Nepomuk Hummel, Carl Maria von Weber and Felix Mendelssohn. On his latest album, the soloist makes the boldness of this musical venture audible: “I was attracted by the fact that these rare jewels were created at a time of change, of new horizons”.
With over forty recordings to his credit, the German pianist cannot be praised too highly for his inventiveness and initiative in exploring unfamiliar terrain. It was this spirit of discovery that led him to a fascinating programme centred on Hummel’s Piano Concerto in A minor, Op. 85, flanked by Weber’s Konzertstück in F minor, Op. 79 and Mendelssohn’s Capriccio brillant in B minor, Op. 22: all of them works whose fabric pulses with inner relationships, allusions and cross-references, united too by the fact that they are rarely to be heard on the concert platform. “There is so much thrilling music that has fallen from favour. I was looking for a new combination”, reflects Matthias Kirschnereit. Michael Sanderling is a conductor he has often worked with, and in this case Sanderling was his first choice: “These works, which represent just as great a challenge for the orchestra, require a high degree of precision, virtuosity and elegant musical discourse”.

The album opens with the A minor Piano Concerto by Mozart pupil Hummel, whose “expansive, symphonically conceived orchestral exposition is still thoroughly indebted to the model of such works as Beethoven’s Third Piano Concerto, only to shift – in the style of the Romantic soloist vehicle exemplified by Chopin’s Concertos – to the piano as the centre of attention”, explains Kirschnereit. Hummel’s Op. 85 must surely have been modelled on Frédéric Chopin’s First Piano Concerto: “The bel-canto-like, elegant coloraturas of the first two movements reference Chopin’s inventive piano style. We know that Robert Schumann engaged intensively with this concerto; furthermore, his only Piano Concerto is also in A minor, its intermezzo-ish middle movement in Hummel’s key of F major … Hummel was a superstar of his time, a charismatic, generous individual – and he supported Beethoven financially from time to time”.
Carl Maria von Weber finished his F minor Konzertstück for piano and orchestra on June 18, 1821, on the morning of the triumphant premiere of his opera Der Freischütz in Berlin. “His Freischütz is omnipresent”, says Matthias Kirschnereit. “I keep hearing Agathe’s arias, scenes in the Wolf’s Glen, jubilant choruses! The work is in advance of its time, it is all of a piece and yet like a free fantasia”. And so to Felix Mendelssohn: “Weber’s Konzertstück again serves as the model for his Capriccio brillant. He played it often, it was part of his core repertoire. Like the Weber’s Konzertstück, it is inspired by nature: I imagine scenes from A Midsummer Night’s Dream or his Walpurgisnacht. Joy and jubilation, despair and inner turmoil find expression in both composers with extremely fast tempos: youthful genius, bold bravado!”.

The teamwork with Sanderling and the symphony orchestra of Hesse Radio can only be described as an act of providence. “This session rounded off the Corona year with an exhilarating highlight”. And so may this music, which conjured up the spirit of a new era with defiant optimism two centuries ago, give us too a future to look forward to in our own times.