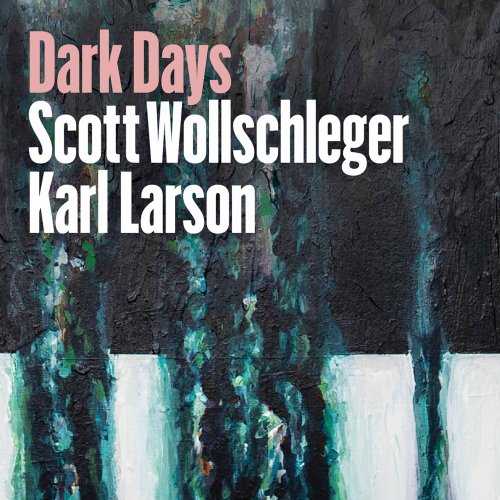 In this intensely introspective collection of solo piano works, Scott Wollschleger brings the listener inside a soundworld that balances sensual and incorporeal impulses within a penetratingly honest expressive frame. Karl Larson’s performances are sensitive and tactile, eliciting watery colors from the keyboard that illuminate each track’s subtle coloristic hue. One can point to many influences on Wollschleger’s approach to the piano, from Debussy to Feldman to his mentor Nils Vigeland, but the power of the music on this recording lies in its deeply personal, almost confessional character.

The album opens with the title track, Dark Days, a meditation on five pitches that are repeated throughout the short piece in the same order and rhythm while being displaced registrally. It is an ideal opening gesture for the music that follows, a contemplation of the complexity of simple elements and a sound painting of a unique color on the piano, a consistent feature of Wollschleger’s work that is a reflection of his synesthesia.

Tiny Oblivion grows from the flourish heard in its opening bars. The gesture is mined for variation, turning it around, extending its internal repetitions, and varying its pitches and registral placement. At select points of the work, the rapidity of the arpeggiation gives way to a more deliberate presentation of pitches, as if to deconstruct the primary gesture and gaze upon its component parts to admire the miracle of its inner workings.

Music without Metaphor is one of several works on the album written in proportional notation, placing emphasis on the rhetorical relationships between musical ideas as dictated by their presentation on the page as opposed to their orientation within a fixed pulse. Within this frame Larson takes advantage of the freedom afforded him to highlight the subtly evolving material. Blue Inscription takes a similar approach to developing ideas but within a more deliberate rhythmic frame. Material is repeated with slight variation in such a way that the ear is momentarily hypnotized before a divergent musical idea breaks the entrancing cycle. Lyric Fragment hints obliquely at the late Romantic character piece tradition (think Brahms Intermezzi or Grieg Lyric Pieces), but as the title suggests, takes a sonic snapshot of that affect and lingers on it.

The set of three pieces with “Brontal” in their title contain some of the most extroverted material on the recording. Wollschleger’s first album with New Focus, Soft Aberration, included Brontal Symmetry, a work he wrote for the Longleash piano trio that is constructed as a sort of memory puzzle. Brontal No. 2 “Holiday”, Brontal No. 6, and Brontal No. 11 share some of these same characteristics, presenting material before reordering it, with an unfolding and related series of relationships between ideas that define the structure of the music and suggest the mysterious nature of human memory.

The final two works on the recording, Secret Machine No. 4 and No. 6, take advantage of the piano’s resonant properties. The short Secret Machine No. 4 is divided into two discrete sections. In the first, playfully quirky figurations are played in a quasi-improvised style, while in the second half of the piece, flowing lines highlight different accented notes while internal pitches are adjusted to change the shade of the prevailing harmony. Secret Machine No. 6 revels in sonorous arpeggiations of a static chord that are sustained with pedal, sprinkled with occasional bluesy grace notes and grounded by rich bass notes. It closes the album much like where it began, on a deep contemplation of one sonority, delving deep within to communicate something essential that lies beyond the superficialities of our information saturated era, and finding solace in the process.