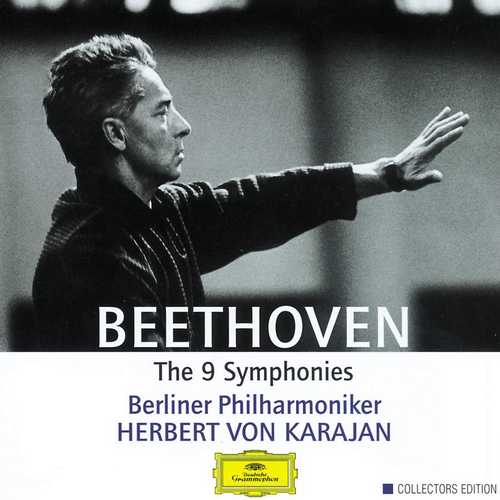 This was the first set of the Nine to be planned, recorded and sold as an integral cycle. It was also a set that had been extremely carefully positioned from the interpretative point of view.

Where Karajan’s 1950s Philharmonia cycle had elements in it that owed a certain amount to the old German school of Beethoven interpretation, the new-found virtuosity of the Berliners allowed him to approach more nearly the fierce beauty and lean-toned fiery m anner of Toscanini’s Beethoven style as Karajan had first encountered it in its halcyon age in the mid-1930s.

Nothing demonstrates this better than the 1962 recording of the Fourth Symphony, fiery and radiant as Karajan’s reading had not previously been, and never would be again. The old shibboleth among writers and musicians that the evennumbered symphonies were somehow less dramatic than the odd-numbered ones meant nothing to Karajan. His accounts of the Second, Fourth, Sixth and Eighth Symphonies were every bit as intense as their allegedly sturdier neighbours. Only in the Seventh Symphony’s third movement Trio and the Menuetto of the Eighth Symphony – where he continued to follow Wagner’s idea of this as an essentially stately dance, a kind of surrogate slow movement – did he deviate significantly from the Toscanini model. And it worked. True, the first movement of the Pastoral Symphony was a touch airless, lacking some of the easy wonderment of Karajan’s old Philharmonia recording. But, then, Toscanini himself had never managed to replicate the unique charm of his pre-war English recording with the BBC SO.

The original review of the cycle entered a number of caveats, some of which still pertain, though it’s the lack of certain repeats and the non-antiphonal dispensation of the violins that may worry some most nowadays. What so enthused us back then was the urgency of the music-making, its vitality and, ultimately, a fierce sense of joy that had its natural point of culmination in a thrillingly played and eloquently sung account of the finale of the Ninth.

The playing of the new rejuvenated BPO dazzled throughout, as did Günther Hermanns recordings: clean and clear, and daringly ‘lit’ with a bright shimmer of reverberation. The recordings have always transferred effortlessly to CD and the present reissue is no exception.