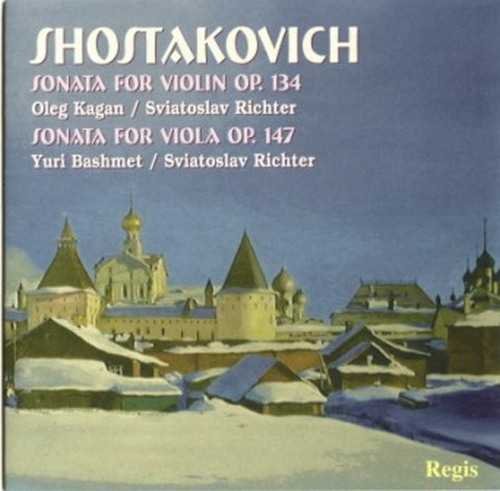 These live recordings from 1985 are fantastic treasures. The Moscow Studio Archives release may now be unavailable — perhaps this Regis version is now easier to obtain. Oleg Kagan plays the Violin Sonata (1968) and Yuri Bashmet plays the Viola Sonata (1975), which was Shostakovich’s last work, both accompanied by the great Sviatoslav Richter on piano. Kagan, who died at a tragically young age, was a student of David Oistrakh, the dedicatee of the Violin Sonata. Yuri Bashmet was the star student of Fjodor Drushinin, the violist of the Beethoven Quartet, and the dedicatee of the Viola Sonata.

These are unmistakably works of the late Shostakovich, brooding and dark. Unlike some, I do not believe that late Shostakovich in general is the best Shostakovich — certainly that is not true of his symphonies or his string quartets. It seems obvious to me that his great works were mainly composed between the late 1930s and the late 1950s. However, these sonatas are truly among Dmitri Dmitrievich’s greatest works, and deserve a wider audience.

Both sonatas share a similar three-movement structure, and both are enlivened by a central Allegretto featuring memorable folk melodies. The Violin Sonata is notable for including the use of tone-rows in the first movement. Both finish with powerful slow movements, the Violin Sonata’s 15-minute Largo and the Viola Sonata’s 17-minute Adagio, which Yuri Bashmet conveys with total conviction.