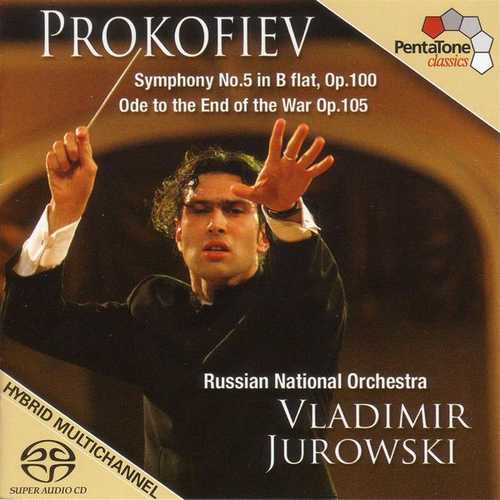 Prokofiev’s Fifth Symphony is amply represented in the catalog by dozens of recordings. But the same composer’s Ode to the End of the War had only two recordings at the time of this release, the best of which was a scrappy 1965 performance with Leonid Nikolayev leading the assembled multitudes of the USSR Radio & TV Symphony. The work itself tends to crumble under the weight of its own mechanical tempos and bombastic orchestration, but its inclusion does make this disc special. For that reason alone, Prokofiev fanatics will have to hear it.

Vladimir Jurowski’s Fifth has the necessary scope and scale, plus plenty of muscle, but a slightly too quick Adagio saps some of the emotional impact from his performance. His Ode to the End of War, with its unrelenting drive and unerring pace, is clearly the best yet recorded. The Russian National Orchestra fulfills both the letter and the spirit of both scores. Like the conductor, however, it leaves a small something to be desired — in this case because of a raw tone and a rough ensemble. Still, the interpretation is persuasive, and easy to endorse for that reason.

Though PentaTone has made some excellent super audio recordings, this one is almost too excellent. If the Russian National Orchestra’s enormously expanded percussion section were any more tangibly present, there wouldn’t be any room left for the listener.