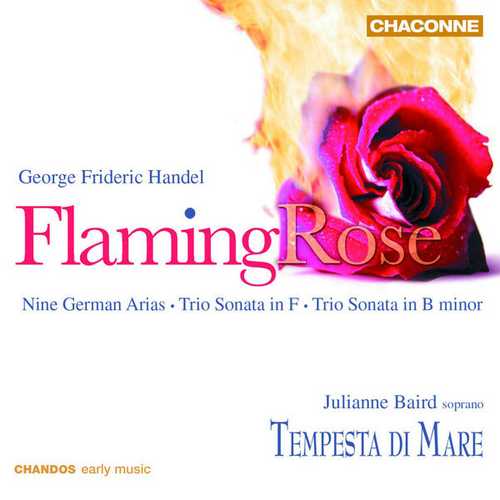 The music on this disc, among the least-known of Handel’s mature productions, shows that the popular perception of him as excelling in big, public works (oratorios, operas, the Water Music) is mistaken; he was equally effective in genres that, because of the course of his musical career, he rarely touched. The program here consists of nine German-language sacred arias for soprano and instrumental ensemble, broken into three groups of three by a pair of trio sonatas. No choir is involved, nor are any Lutheran chorales, but the music has affinities with the arias in Bach’s cantatas: it is contemplative, lyrical-spiritual, and modest in dimension. The texts are by Heinrich Brockes, who wrote a version of the Passion story that Handel had set in 1716; Telemann and many other composers made their own Brockes-Passion settings later, and it was adapted for use in Bach’s St. John Passion.

The arias date from around 1725, by which time Handel was well ensconced in England and composing music primarily in Italian and English; he appears to have written these German pieces because of the success of the earlier setting, which led to a chain of events that, in an age tragically bereft of instant-messenger services, stretched out over 10 years. Several other leading lights of the early music vocal scene, including creamy-voiced young British soprano Carolyn Sampson, have offered strong recordings of these arias, but this American version, featuring soprano Julianne Baird with the Philadelphia-area ensemble Tempesta di Mare, is ideal.

In fact it sets a new standard for historically informed Baroque recordings in the U.S., a country not currently in the forefront of developments in the field. It is respect for the intimate quality of the music that sets this recording apart: Baird has the agility to execute Handel’s ornate vocal lines, which resemble in outline those in some of his Italian opera arias, at a low volume, and the entire group exudes a quiet intensity that’s a perfect match for the nature imagery of the texts: the title Flaming Rose comes from one of the arias, in praise of that flower — “all eyes that see your magnificence, dazzled by your charm, must confess that you were made by the finger of God.” Group co-founder Gwyn Roberts, who has recorded the technically brutal recorder sonatas of Francesco Veracini in the past, is especially noteworthy on recorder and transverse flute, and the sound, recorded in a small college auditorium, effectively conveys the close quarters in which this music would originally have been played; a church recording would tend to lose the directness and inward ecstasy so effectively communicated by Baird and the instrumentalists. All texts and notes are given in English, French, and German. Highly recommended all around as a superb examination of Handel’s quieter side.