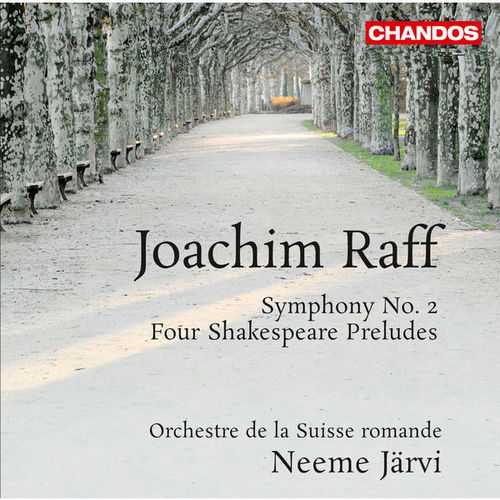 This disc marks the beginning of a new series, dedicated to the engaging, albeit neglected, orchestral works of the German-Swiss composer Joachim Raff. The survey starts with Symphony No. 2 and the orchestral preludes to four plays by Shakespeare: The Tempest, Macbeth, Romeo and Juliet, and Othello, all idiomatically performed by the Orchestre de la Suisse romande, conducted by its new Artistic and Music Director, Neeme Järvi.

Well crafted, with brilliant orchestration and strong melodies, the works of Raff were very highly regarded during his lifetime. In fact, he was one of the most widely performed and influential musicians of his day – some even ranked him with Wagner and Brahms. A highly prolific composer of close to 300 works, he wrote extensively in virtually all forms. Soon after his death, however, his reputation began its descent and his music came to languish in relative obscurity; today his works are largely forgotten.

Composed in 1866, Symphony No. 2 opens with an extended lyrical Allegro. The second movement, Andante con moto, is a wonderfully evocative piece of almost religious intensity. The scherzo, marked Allegro vivace, is the first example in his symphonic œuvre of the debt which Raff owed to Mendelssohn in this type of movement, and the finale, beginning Andante maestoso, then taking off Allegro con spirito, makes a grandiose conclusion.

Thirteen years and close to 150 works separate Symphony No. 2 from the orchestral preludes that Raff composed to four of Shakespeare’s plays. Although not programmatic in any real sense, these overtures are still highly effective in evoking the atmosphere of Shakespeare’s noted creations: In The Tempest, Raff conjures music of great dramatic contrast, while in Macbeth he evokes a truly dark and menacing sound world, portraying the three witches with particular effectiveness. The tender love theme of Romeo and Juliet perfectly complements the powerful depiction of jealousy in Othello.