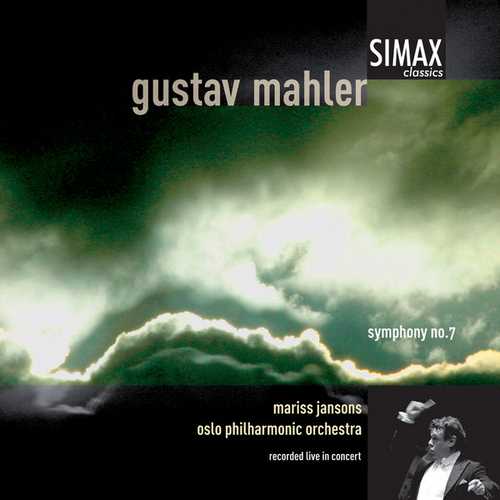 Gustav Mahler’s strange and unworldly Symphony No. 7 is performed here by one of the great musical collaborations of the last 20 years, the internationally renowned conductor Mariss Jansons and the orchestra with which he originally came to prominence, the Oslo Philharmonic. Today Mariss Jansons is one of the most sought after conductors in the world.

Through their long collaboration Jansons and the Oslo Philharmonic Orchestra have developed a unique relationship. In the first couple of years of this century Jansons and the OPO did a number of concerts with Mahler’s symphonies. A set of Symphonies Nos 1 and 9 has already been released (PSC1270), and to follow this vibrant, exciting recording of the Seventh Symphony, there will be another – of Symphony No 3 – next year.

Of all Mahler’s symphonies, the Seventh has remained the most enigmatic. The orchestra is slightly smaller than Mahler had used for the Sixth Symphony, but he adds some unusual instruments, notably a tenor horn and cornet in the brass, and of course the mandolin and guitar for the second Serenade. The Symphony is particularly known for its central scherzo, which bears the unusual tempo-marking Schattenhaft (shadow-like).