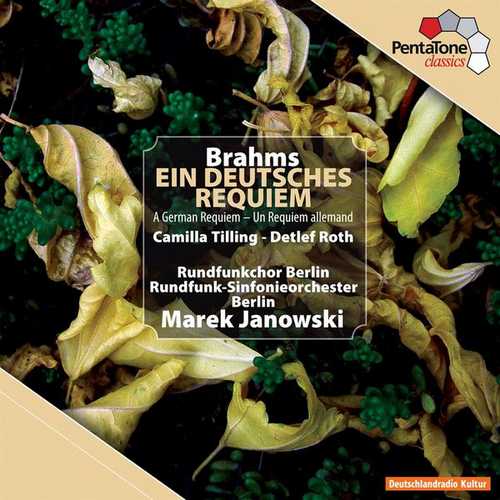 The same choir, Rundfunkchor Berlin, recently recorded this work for Deutsche Grammophon but was not satisfied with the result. This is probably the best choir for this repertoire in the world and it was keen on re-recording this work for PentaTone. Janowski proves how well he understands the repertoire.

Marek Janowski leads Rundfunkchor and Rundfunk-Sinfonieorchester Berlin in a solid performance of Brahms’ Ein deutsches Requiem on this Pentatone hybrid SACD. He doesn’t bring particularly distinctive new insights to the piece, but just about everything is absolutely in place, and that is an achievement in a work with the emotional range and difficulty of this one. The opening is appropriately hushed and the second movement is as frighteningly thunderous as it should be. “Wie lieblich sind deine Wohnungen” is a highlight, with an urgency that blossoms into an outpouring of ecstatic fervor as it surges toward its celestial climax. Both chorus and orchestra perform at the highest level of professionalism, singing, and playing with discipline, passion, and a warmly enveloping tone. Soprano Camilla Tilling does not have a large voice, but it is focused and intense, and she can soar when the music calls for it. The weak link is baritone Detlef Roth; his singing is insightful but his voice lacks the heroic timbre the music requires, and he has a wobbly top and shaky bottom. The forces are beautifully balanced and the music’s extreme dynamic range is well captured. This fine performance may be unlikely to join the ranks of the most sublime recordings of the work, but its virtues make it one that would be a fine introduction to this choral masterpiece.