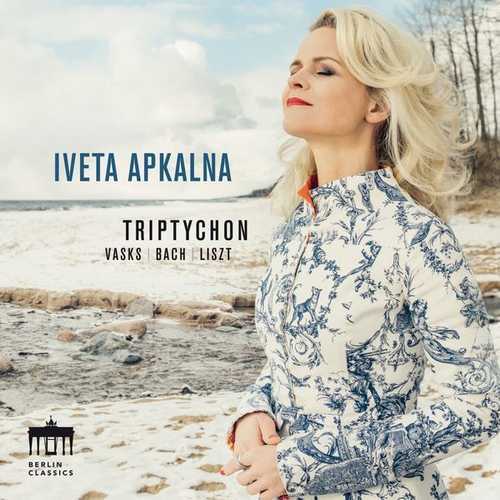 Having garnered the ultimate accolades from a host of arts review pages for her premiere recording on the Hamburg Elbphilharmonie’s organ and on the double organ of the Taiwanese Kaohsiung Center for the Arts, concert organist Iveta Apkalna now presents her third release on the Berlin Classics label as a triple album. “Triptychon” spans three centuries and three religious confessions on one single organ: Johann Sebastian Bach, Franz Liszt and Pēteris Vasks can be heard on this, the first release of a recording played in Neubrandenburg’s Concert Church on the organ which she helped to develop and inaugurated.

Apkalna opens the first altar panel with three works by her compatriot and personal friend: alongside Arvo Pärt, Pēteris Vasks is the best known and most often played Baltic composer. “Latvia is Pēteris Vasks and Pēteris Vasks is Latvia”, explains the organist. “I hear the landscape of Latvia in his music, the far horizons of our flat country, the meadows and forests, birdsong and the sea. Pēteris Vasks is undoubtedly a truly Latvian character, though he also breathes the “global air”. Otherwise people all around the world would not love his music”.

Johann Sebastian Bach is at the heart of Iveta Apkalna’s triptych – just as he is central to the career of any organist. For her, his Toccata, Adagio and Fugue in C major BWV564, the Trio Sonata in D minor BWV 527 and the 6 Schübler Chorales, BWV 645-650 represent the greatest possible stylistic, compositional and tonal variety backed up by personal motives. “I believe this is truly a phenomenon: Bach’s music touches everyone, really everyone, and leaves its mark on the lives of every human being, even those who normally have nothing to do with music”.

Franz Liszt, who achieved worldwide fame as a travelling virtuoso and visionary composer, was also a formidable organist who, towards the end of his career, took holy orders. His oeuvre too is close to Iveta Apkalna’s heart; indeed, she defines as a sort of calling card the Prelude and Fugue on B-A-C-H or the chorale arrangement of Nun danket alle Gott, which has a link with Apkalna’s “home organ” in Riga Cathedral, since Franz Liszt contributed the work for the inauguration of the instrument. The contrast could hardly be greater: Vasks, the pastor’s son with a close spiritual affinity to nature, Bach, the monumental Protestant music-maker, and Liszt, the lounge lizard with his adoring groupies who found his vocation in later life.

To play all these works by such highly diverse composers on the same organ is not something to be taken on lightly. The former Marienkirche in Neubrandenburg, which was deconsecrated in 2001 and then revived as a secular concert hall, was gifted an organ in 2017 thanks to the generous sponsorship of businessman Günther Weber. The job of building a new organ was entrusted to two long-established organ-building workshops, Klais (Bonn) and Schuke (Berlin). As the two organ builders Philipp Klais and Martin Schwarz explain: “The concert church in Neubrandenburg has its very own, unique acoustic, one that we organ builders greatly appreciate”.

The auditorium has an ideal combination of clarity and reverberation time. This acoustic characteristic was the point of departure in deciding on the tonal concept. This was achieved in close cooperation between the organ workshops in coordination with Iveta Apkalna, whom Günther Weber had requested to provide artistic advice.

With its 2852 pipes, measuring between 8 millimetres and almost 7 metres high, the organ has 70 stops. There are 65 pipes in the organ case, the visible part of the instrument: 45 metal pipes in front and 20 wooden ones in the sides of the case. All of the visible pipes are sonorous. Iveta Apkalna is impressed: “The organ sounds incredibly warm, velvet-textured and well rounded. And thanks to its clearly defined 70 stops, it provides the organist, whether playing solo or with orchestra, with every opportunity to play works ranging from the early Baroque through the Romantic literature to modern compositions. Thanks to the detailed process involved and the intensive, friendly collaboration with the two organ-builders Philipp Klais and Martin Schwarz and with the organ’s sponsor Günther Weber, this instrument really turned into a personal love story”.