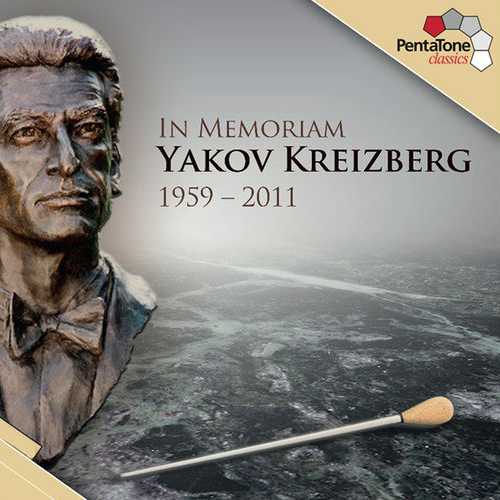 Kreizberg died last year at the age of only 51 and made many recordings for PentaTone. All of Julia Fischer’s concerto recordings were accompanied by him. Many of the tracks featured in this In Memoriam collection come from award winning albums and include works by Dvorak, Debussy, Wagner, Tchaikovsky and Khachaturian.

In Memoriam: Yakov Kreizberg 1959-2011 is a double-SACD presentation of performances he recorded with the Netherlands Philharmonic Orchestra, the Vienna Symphony, and the Russian National Orchestra for PentaTone Classics. Recorded between 2002 and 2008, the selections give a small idea of his extremely large repertoire, so it seems less a representation of his concert career than a sampling of previously issued tracks. Yet there is value in all these recordings, and if they don’t give an accurate portrait of the conductor, whose unrecorded work with the world’s major orchestras was much more extensive than this package could demonstrate, these highlights reveal appealing aspects of Kreizberg’s small discography. The generous serving of evocative tone poems by Antonin Dvorák is a reminder of Kreizberg’s practice of devoting whole concerts to one composer’s music, and the remaining works by Claude Debussy, Richard Wagner, Pyotr Il’yich Tchaikovsky, Johann Strauss, Jr., Franz Schmidt, and Aram Khachaturian provide an alternative for listeners who want a mix of popular classical hits. An attractive feature of the second disc is the appearance by violinist Julia Fischer, who worked with Kreizberg for seven years and gave her personal tribute in the liner notes. The sound of these recordings is perhaps the best recommendation for the package because PentaTone’s exceptional multichannel recording is as deep, spacious, and richly detailed as ever, and the musicians sound remarkably vibrant and present.