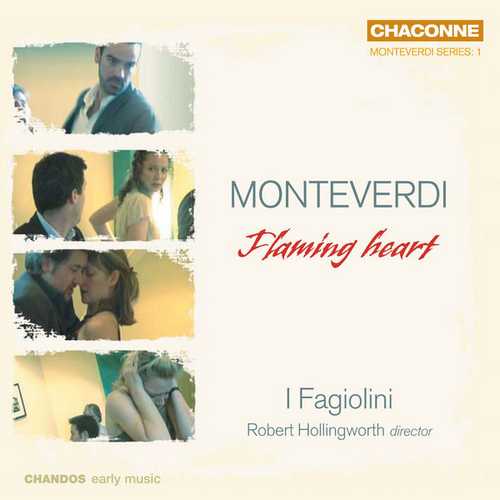 Flaming Heart seeks to show the full Monteverdi, a Monteverdi of both beauty and horror, colourful, vivid, and always completely alive. Unlike the ‘complete edition’ approach this series presents a much more imaginative selection of his works, beginning with the prologue from L’Orfeo and continuing with the very best of his works for a capella ensemble, soloists and strings.

The group I Fagiolini (“The Green Beans”) is British, not Italian, dating back to a student ensemble formed at Oxford University in the 1980s. The booklet notes ask straightforwardly why, with the profusion of spectacular Italian (and, they might have added, French) takes on Monteverdi’s music over the last few years, an English contribution is needed; part of the answer refers justifiably to the group’s sheer love of Monteverdi’s music. It need not have defended this approach, for this disc definitely fills a niche. Many of the new Italian Monteverdi recordings either focus on a large single work or are parts of sets that chronologically cover the composer’s music, but Flaming Heart is intended as a single-disc introduction to the composer, reaping the benefits of the insights that historical performance and a close attention to Monteverdi’s treatment of texts have brought. The group’s execution of this concept is superb. It involves putting the texts front and center in all the works on the recording, an approach that somewhat blurs the usual distinction between earlier and later Monteverdi works, between the older-style madrigal and the declamatory “seconda prattica,” linked to the birth of opera, that Monteverdi honed to perfection. For I Fagiolini, the paramount importance of text lies behind a long evolution that began before the invention of opera in 1600, and the performances embody this idea beautifully. Sample the Book IV madrigal Anima mia, perdona (track 3) as it catches fire and leads into the speaker’s passionate identification with a lover’s weeping — in I Fagiolini’s reading, the chains of chromaticism don’t come off like Gesualdo but rather breathe the freer spirit of the later madrigals, and they are extraordinarily powerful. The program covers madrigals from several different books, as well as excerpts from the opera Orfeo, which receive an imposing, spacious treatment from a larger instrumental ensemble. One can imagine hearing the Orfeo music presented outdoors in one of the great formal gardens of the Italian aristocracy, and then moving inside for the emotional intensity of the madrigals. In short, if you’re looking to try one new Monteverdi disc, this one makes a fabulous choice.