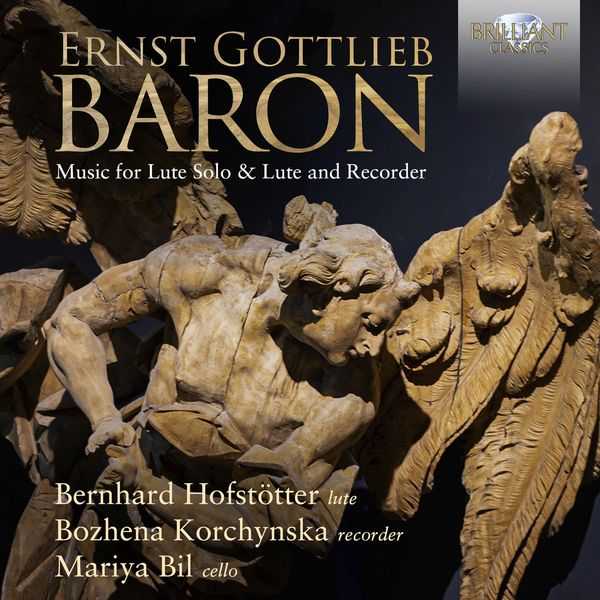 Though the music of Ernst Gottlieb Baron (1696–1760) is scarcely known to the wider public, the complete edition of his surviving compositions presented by Jan W. J. Burgers in 2005 (which forms the basis for the recordings here) offers an excellent opportunity to study and perform the works of this late Baroque master and restore them to the status they deserve. Though it can be assumed a large portion of his work was lost, with around a dozen suites for solo lute and ten ensemble pieces with obbligato lute, Baron’s extant oeuvre is nonetheless substantial.

In the solo compositions, we predominantly find short, mostly two-part pieces in a late Baroque idiom. While these “simple” suites, likely intended for pupils, offer little justification for Baron’s contemporaries having ranked him among the most important German composers of his day, the solo compositions also include works of a very different quality. The first four movements of the Suite [Partie] in F recorded here draw on wide-ranging melodic arcs and expressive modulations. The Suite [Sonata] in B-flat is a special case: it is attributed by the original copyist to Silvius Leopold Weiss, and to Baron only by a later copyist (apparently J. G. I. Breitkopf). But it has been rightly pointed out that the presumed authorship of Weiss does not stand up to a stylistic comparison.

Baron’s ensemble works include eight suites or sonatas for lute and melody instrument (recorder, transverse flute, violin or oboe), with a cello at times added as a bass part. In some of these works the treatment of the lute part is particularly virtuosic, assigning the lute an important role in the melodic composition. Baron’s surviving chamber music shows him as a master of the “galant” style and offers attractive and original music from a time in which the lute was already losing ground before disappearing completely from concert life in the second half of the 18th century, soon after Baron’s death.

Ernst Gottlieb Baron (1696 –1760) was a German lutenist, composer and writer on music. Baron was born in Breslau into the family of Michael Baron, a maker of gold lace. He showed an inclination to music from an early age, and later made it his profession. He studied lute from about 1710 with a Bohemian named Kohott, and from 1715 attended the University of Leipzig, where he studied philosophy and law. He spent the period from 1719 to 1728 in travels from one small court to another. He visited Halle, Köthen, Schleiz, Saalfeld and Rudolstadt, Kassel, Fulda, Würzburg, Nuremberg and Regensburg, returning in 1727 to Nuremberg where he published his Historisch-theoretische und practische Untersuchung des Instruments der Lauten, the work for which he is principally remembered. In 1737 he joined the musical ensemble of Crown Prince Frederick of Prussia as a theorbist, where he remained till his death.

This new recording presents works for lute solo, or in combination with other instruments: solo sonatas, a concerto for lute, flute and cello, a concerto for lute and recorder, a concerto for lute, oboe and cello and other works. They show Baron as a master of the “galant” style and offer attractive and original music from a time when the lute was losing ground before it was to disappear completely from concert life in the second half of the 18th century, soon after Baron’s death.