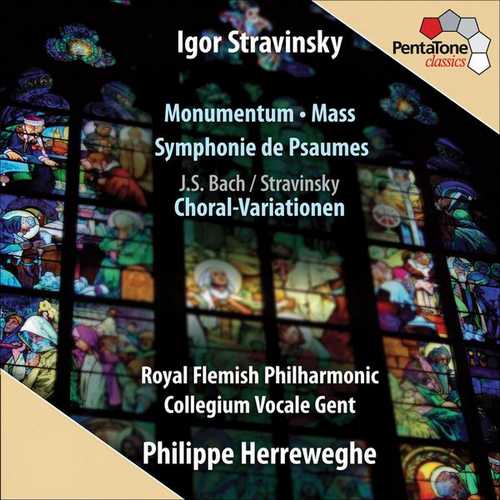 Collegium Vocale Gent is considered to be one of the best vocal ensembles in the world. The most important work on the album is the Symphony of Psalms. Stravinsky said “it is not a symphony in which I have included to be sung. On the contrary, it is the singing of Psalms that I am symphonizing.”

PentaTone Classics usually deals in high-end reissues of older recordings, particularly those drawn from the Philips catalog. However, upon encountering this recording of Stravinsky with Philippe Herreweghe, the Collegium Vocale Gent, and the Royal Flemish Philharmonic, one cannot be blamed for taking pause to wonder, “Now who did Herreweghe record this for — Erato? Harmonia Mundi?” No sir or ma’am; Herreweghe has never recorded Stravinsky’s Monumentum pro Gesualdo, Mass, Chorale Variations on “Von Himmel Hoch,” or the Symphony of Psalms before, nor any other Stravinsky for that matter. This is a NEW PentaTone recording, a live one made in Antwerp in 2008. Contrary to expectation, Herreweghe does not conduct the Monumentum pro Gesualdo as though it was Gesualdo, and moreover, it’s a pretty straitlaced and sober performance to boot, though it’s more of a bloodless coup than Stravinsky’s own recording, made in 1960. The Mass is both well sung and well coordinated; a very neat and tidy performance, but too fast tempo wise; one wonders during the Sanctus “what is he trying to do, catch a bus?” The Chorale Variations on “Von Himmel Hoch” is better in terms of pacing, though there are moments of lax coordination among the winds; this is, after all, live. This issue is ironed out in the Symphony of Psalms. As in the case of the Monumentum pro Gesualdo, the Symphony of Psalms is a pretty good performance, though at times the orchestral balance seems a little off-kilter; nevertheless, the second movement packs a punch. Although this is a hybrid multichannel disc, sometimes there are little inequities of sound; the winds in the Mass have a tendency to overpower the singers, and within the Collegium Vocale Gent at times the gents seem a bit louder than the ladies.

There is no questioning Herreweghe’s strong showing in Baroque literature; particularly in Bach cantatas. However, Herreweghe has dipped into modern repertoire here and there and usually with the same or similar results as on this PentaTone disc. The 20th century is just not Herreweghe’s strong suit, and one wonders why he keeps trying to play his hand in it, though this is not all bad; just not quite the strong showing one would hope it to be.