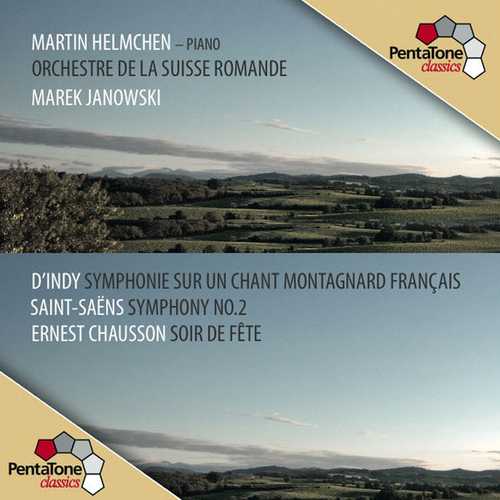 All the pieces included here are by French composers who lived during the impressionist period. D’Indy’s Symphonie sur un chant montagnard français is a sort of hybrid work, a mixture of a symphony and a piano concerto.

This work enables the highly regarded Martin Helmchen to demonstrate his musical and technical skills once again.

French music of the late Romantic era was almost completely overshadowed by the established German tradition, to the effect that many exceptional composers, such as Vincent d’Indy, Camille Saint-Saëns, and Ernest Chausson, were relegated to secondary status behind their German colleagues, and their works were seriously under-performed. This situation persisted through the 20th century, and the works on this 2011 hybrid-SACD from PentaTone Classics might seem unfamiliar because they were seldom programmed and recorded. Fortunately, in the 21st century there are champions for French symphonic music, such as Marek Janowski and the Orchestre de la Suisse Romande, and the ongoing rediscovery of this somewhat neglected repertoire promises a restoration of some great pieces. Perhaps best known of the three selections, d’Indy’s Symphony on a French Mountain Air is wonderfully atmospheric, and its delicate orchestration and evanescent moods in some ways anticipate Impressionism. The Symphony No. 2 in A minor is played far less frequently than Saint-Saëns’ extremely popular Symphony No. 3, “Organ,” though it is a solid piece of craftsmanship and is quite representative of the Classically oriented French symphonies produced in the mid-19th century. On its surface, Chausson’s Soir de fête seems to have the strongest German flavor, yet while the composer was plainly influenced by Liszt and Wagner, the piece also owes a considerable amount of its verve to Berlioz. Janowski and the orchestra present these works with smooth technique and scintillating colors, and the depth and lushness of the ensemble’s sound come across impressively in the multichannel format.