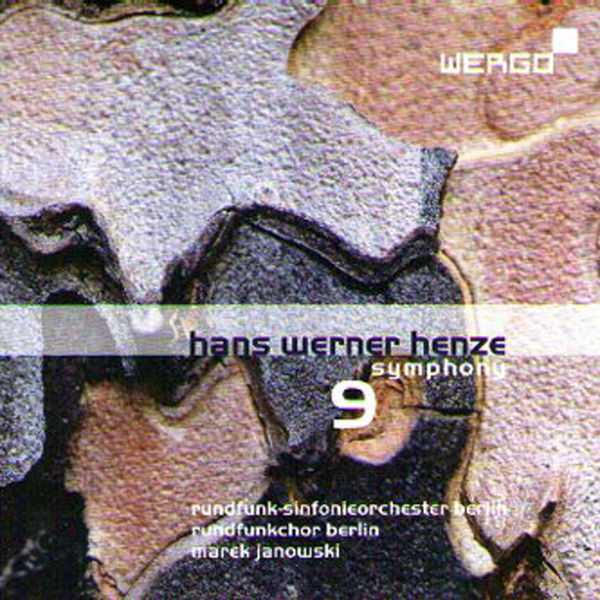 The composer Hans Werner Henze describes his Ninth Symphony for mixed chorus and orchestra (words by Hans-Ulrich Treichel after the novel “The Seventh Cross” by Anna Seghers) as follows: “What happens in this symphony is an apotheosis of terror and pain. It is a summa summarum of my creative output, the attempt to come to terms with the assaults of an arbitrary and unpredictable world. A German reality, this symphony is above all an expression of enormous respect for the people who dared to resist in the time of Nazi-Fascist terror and who gave their lives to defend freedom of thought.” German-born but long resident in Italy, Hans Werner Henze has just turned 83 and is the most distinguished living composer of his generation. He has been hugely productive and much of his music is attractive and accessible with the added lure of extra-musical programmes that invite the listener in.

This second recording of Henze’s monumental Ninth Symphony again features Rundfunkchor Berlin, the choir that gave it its premiere in 1997, with the Berlin Philharmonic, led by Ingo Metzmacher. In Wergo’s 2009 release of the seven-movement symphony, Marek Janowski conducts the choir, with Rundfunk-Sinfonieorchester Berlin. Henze was aware of the expectations created by a “ninth symphony” — that it be an artistic summation, a work of considerable substance that addresses a universal theme — and he takes on the devastation of the suffering caused by the Nazi regime, and the courage of those who attempted to stand against it. Henze has the chorus, using texts by his frequent collaborator Hans-Ulrich Treichel, based on a Holocaust novel by Anna Seghers, singing almost continuously, except for an orchestral epilogue to the fifth movement. The scoring is so chorally and orchestrally dense that it’s difficult to tell precisely whether it is Henze’s labyrinthine writing or a flaw of engineering that accounts for the tendency of the sound to be somewhat murky, but the responsibility is probably the composer’s, because the moments that are lightly scored, particularly the final movement, stand out in strong relief. That is not necessarily a flaw in the music, given its horrific subject matter, but a testimony to Henze’s success in creating a harrowing atmosphere of confusion and disoriented terror. This is not music that can be experienced dispassionately; it compels the listener to either succumb and be drawn into the power of its nightmarish imagery or turn away from it. The choir and orchestra perform the demanding score with relentless intensity and passion. Henze’s Ninth Symphony is not for the weak of heart, but for listeners willing to confront the overwhelming horrors it so grippingly portrays, and it can be immensely moving.