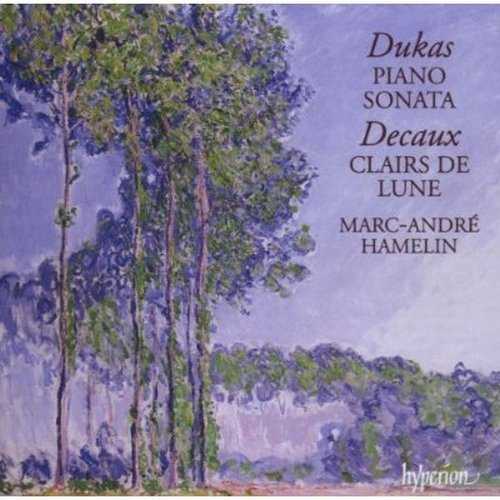 Decaux has been done better

REVISED 1/14/2007: I am editing this review to touch on the Dukas Sonata, which I unfairly dismissed in my first writing, and to restate some remarks that might have been taken as inflammatory. Though I may not love the Dukas Sonata as much as its companion work (or even Dukas’ own Variations on a Theme of Rameau), the composer of “The Sorcerer’s Apprentice” had extremely high standards, and he only released only a few works to the world. They should all be considered important.

The Dukas Piano Sonata is a giant of a work, spanning four movements and forty-five minutes, and the difficulty level (both mental and technical) puts it out of reach of all but the greatest pianists. It has been recorded a few times, most recently on an unlovely and poorly recorded Naxos CD by Chantal Stigliani, but with this release it gets a reading by a virtuoso of major international standing.

Hamelin’s technical acuity is never in question, and this disc is no exception, but Hamelin knows as well as anyone that a great technique alone does not make a great performance. The first step when learning a difficult work is to make it easy to play; the second, and by far more arduous, step is to make it easy to listen to. It is clear that Hamelin went to great lengths to present this fearsomely thick, dense, and multilayered score with as much simplicity and honesty as could ever be reasonably expected. It will still take multiple listenings to acclimate to the sheer size of the work – to find one’s way in it – but fewer, most likely, than it would have taken with any prior recording. Furthermore, the payoff, as you might expect from Dukas, is great. The themes are unforgettable, their development is organic and finely tuned, and the breadth of emotional content is staggering. It can be compared favorably to the Schumann Fantasy, Op. 17 for its warmth and structural perfection.

The only thing that keeps me from giving my unconditional love to the Dukas is that some themes, including some of the grandest ones, come out unintentionally comical. This may be Hamelin’s fault, as his reading sometimes lapses when the material becomes triumphal. The finale in particular sometimes sounds like circus music, or like something out of a video game, because – this is my interpretation – it is not coming from inside Marc-Andre. It’s coming from his mechanism, and as us pianists know, the mechanism is a stupid, stupid thing sometimes.

At any rate, my focus from the moment I saw this CD on the shelf was Decaux’s Clairs de Lune, having seen a note about the piece in Dubal’s Art of the Piano book. I was extremely impressed upon first listen, but I am glad I decided to buy a second recording before writing this review – that being Frederic Chiu’s, which is pretty cheap and widely available on the Harmonia Mundi label, coupled with wonderful readings of Ravel’s Miroirs and Schoenberg’s Op. 11.

This is not to say that Hamelin’s reading doesn’t have its merits. As he does in the Dukas, Hamelin presents the music simply and directly, with big and extremely well-controlled shapes. He is much more fluid, and he is easier to understand on the first listening. The first three pieces have a Philip Glass-esque suspense, a suspense which pays off with the wonderful, pregnant energy in the concluding piece, La Mer. I got the impression that something wonderful was about to happen, a feeling that ascended higher and higher before fading away into the ether – letting the expectation of joy down into a dark, irresolute close that will chill any receptive listener to the bone. Chiu’s reading lacks this excitement.

Overall, though, I have to say that Chiu’s performance is superior. He is one of the most refined pianists on the active circuit, and the nuance that he brings to this music makes Hamelin sound glib, rigid and rushed by comparison (Hamelin’s reading is, indeed, five minutes faster). The Canadian may have the technique and strength of a titan, but Chiu’s mental acuity simply makes for a more satisfying, deeper, and more powerful reading – despite the fact that he exerts himself much less. The shade and shadow, the languor and stillness, and the hush of night are just some of the oustanding qualities that seem to ring slightly false in Hamelin’s reading after hearing the way Chiu brings them to life with his multidimensional, keenly felt and absolutely lucid performance.

If the idea of hearing Dukas’ “French Hammerklavier” played by an expert interests you, I urge you not to pass this disc up, even if it is not perfect. And once you’re done with the Dukas, by all means, give the Decaux a try. Even if Chiu’s reading is ultimately more satisfying, this one is more likely to make you love the piece on the first listening.