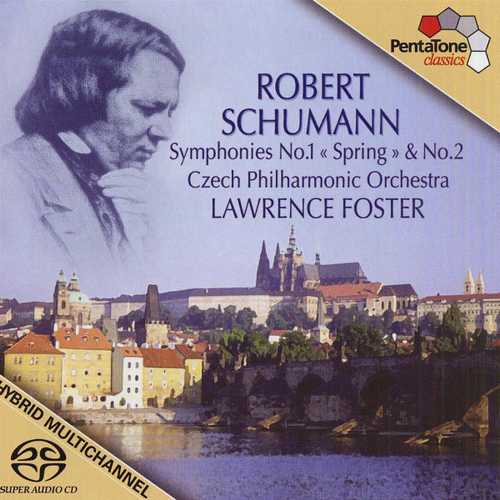 The recording was made in the fine acoustics of the Dvorak Hall of the Rudolfinum, the orchestra’s prestigious home in Prague.

This disc reveals the Czech Philharmonic to be a shadow of its former self in 2008. An ensemble known for its singing strings, playful woodwinds, and polished ensemble under former conductors Vaclav Talich, Karel Ancerl, and Jirí Belohlávek here sounds heavy, dull, and phlegmatic in a dreary coupling of Schumann’s First and Second symphonies led by Lawrence Foster. The Second’s Adagio espressivo suffers from a lean and anemic string sound, the First’s Finale has watery woodwinds, and the First’s Andante un poco Maestoso has genuinely brutal brass playing. The overall ensemble is shaky, and the playing of the principals is bland. Even Schumann’s characteristic lyricism is muted here, especially in the Allegro non troppos of the Second. Although he clearly has the technique, Foster seems unable to persuade the Czech to play as well, to get as enthusiastic, or to enjoy what it is doing, as it used to. In short, this disc does no one any favors — not the composer, not the conductor, and certainly not the orchestra. PentaTone’s super audio digital sound is clear and immediate, but oddly hollow.