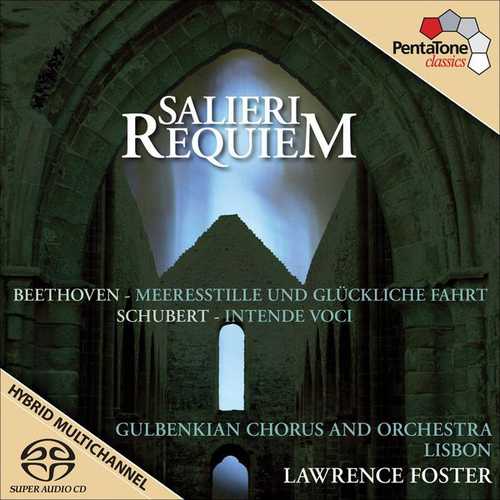 The Salieri Requiem is a forgotten work which Salieri composed for his own funeral ceremony 20 years before he actually died. This is a world premiere recording. Beethoven and Schubert were students of Salieri and were present at his funeral where the Requiem was first performed.

Antonio Salieri remains best known for the image of him promoted by the play and film Amadeus, both based on a story that went back almost to the time of Mozart’s death: even Alexander Pushkin, writing in Russia in the 1820s, could assume the audience for his short play Mozart and Salieri was familiar with the idea that Salieri killed Mozart out of what might be called professional jealousy. Modern historians believe that it’s all a load of tosh, and in fact the pendulum is swinging to the other extreme with suggestions that Mozart might have written his three final symphonies for a private orchestra Salieri maintained. Performers are starting to resurrect Salieri’s works, which are competent, splendid (as Joseph II’s court composer he had resources at his command that were hard for Mozart to muster), and almost always square and conventional. Even the fact that he apparently wrote this Requiem in C minor for his own funeral (it was performed there) did not stimulate much of a personal response to the text, which is mostly given to the choir. For Amadeus fans, the work does not betray any anxiety of influence from Mozart and really sounds very little like Mozart’s Requiem in D minor, K. 626, at all. The news on the performance front is all good, and if you want to try out one of Salieri’s large-scale works this makes a fine place to start. The venerable Chorus of the Gulbenkian Foundation of Lisbon under Lawrence Foster still has a smoother sound than just about any all-adult choir around, and the super audio sound is superb. A final attraction is the presence of two short works, the only occasionally heard late Beethoven cantatas Meeresstille und glückliche Fahrt, Op. 112 (Calm Sea and Prosperous Voyage), and the still rarer and unaccountably neglected Intende voci in B flat major for tenor, chorus, and orchestra, D. 963, dating from the last few months of Franz Schubert’s life. This 10-minute work distills the large-scale harmonic thinking of Schubert’s late masses down to a modest size and receives a fine performance here.