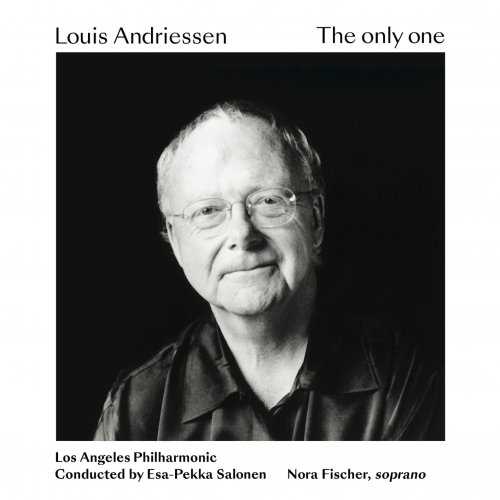 ‘Andriessen used bits of old music, an allusion to the Dies Irae motif and some Minimalism, a jazz riff here and a Mexican brass allusion there, as he often has. But he always remakes it into a complex and powerfully blatant new thing, and here edge-of-your- seat operatically so.’ – Los Angeles Times

Nonesuch Records releases the world premiere performance of Louis Andriessen’s The only one by the Los Angeles Philharmonic, which was commissioned by the LA Phil with generous support from the MaddocksBrown Fund for New Music as part of its centennial celebrations. The only one was recorded live in May 2019 at Walt Disney Concert Hall and conducted by LA Phil Conductor Laureate Esa-Pekka Salonen with solo vocalist Nora Fischer. Additional The only one commissioners include NTR ZaterdagMatinee and BBC Radio 3.

Two artistic discoveries influenced Andriessen as he wrote The only one. The first was a collection of poems by the Flemish poet Delphine Lecompte from The animals in me. “These witty, intelligent, experimental, and sometimes scabrous poems immediately fascinated me. My focus turned to faraway America, with its great tradition of songwriting”, he says.

His second discovery was the work of Nora Fischer, an Amsterdam–based singer known for developing dynamic creative projects that fuse classical and pop music. Andriessen says, “The depth of her versatility has strongly influenced the musical language of the piece.” He further explains that “the piece flirts a bit with certain kinds of pop songs and light music, and starts out with a beautiful song.”

Louis Andriessen, according to the Guardian, is ‘not only the leading Dutch composer of our time, but one of the most important figures in European music in the last half century, whose influence has spread far beyond that of his own works.’ His music has explored politics, time, velocity, matter, and mortality in five works for large ensemble: De Staat (Nonesuch, 1991), De Tijd (Nonesuch, 1993), De Snelheid, De Materie (Nonesuch, 1996), and Trilogy of the Last Day. His stage works include the Theatre of the World (Nonesuch, 2017, also an LA Phil commission), La Commedia (Nonesuch, 2014), Writing to Vermeer (Nonesuch, 2006), and Rosa: The Death of a Composer (Nonesuch, 2000), as well as the monodrama Anaïs Nin. Nonesuch also released an album with his De Stijl and M is for Man, Music, Mozart in 1994. Andriessen’s recent awards include the Marie-Josée Kravis Prize for New Music, the Caecilia Prize, and the Grawemeyer Award. Redefining what an orchestra can be, the LA Phil is as vibrant as Los Angeles, one of the world’s most open and dynamic cities. Led by Music and Artistic Director Gustavo Dudamel, this internationally renowned orchestra harnesses the transformative power of live music to build community, foster intellectual and artistic growth, and nurture the creative spirit.

Esa-Pekka Salonen is Music Director of the San Francisco Symphony and the Principal Conductor and Artistic Advisor for London’s Philharmonia Orchestra. As the Music Director of the Los Angeles Philharmonic, where he is now Conductor Laureate, Salonen was instrumental in opening the Frank Gehry-designed Walt Disney Concert Hall and making the orchestra one of the best- attended and -funded in the country. He is the Artist in Association at the Finnish National Opera and Ballet, and the cofounder of the annual Baltic Sea Festival.

Amsterdam–based singer Nora Fischer’s performances range from traditional concert programs to genre-defying collaborations – such as her 2018 debut album HUSH and her work with Yo-Yo Ma’s world-renowned Silkroad. Her repertoire ranges from Monteverdi to the many compositions that have been written for her, including work by Osvaldo Golijov, David Lang, and Louis Andriessen. She has performed internationally, from the Philharmonie de Paris and Walt Disney Concert Hall to the Lowlands Pop Festival and has premiered many new operas, most recently Andriessen’s Theatre of the World.