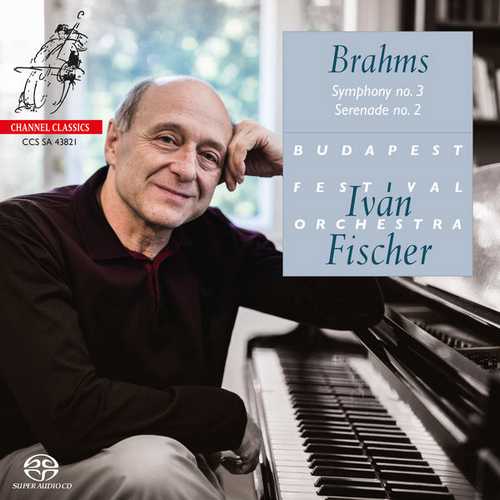 Founded in 1983 by Iván Fischer and the late pianist and conductor Zoltán Kocsis, the Budapest Festival Orchestra quickly became one of the world’s more prominent orchestras. The handpicked young virtuosos who fill its ranks produce a beautiful sound and superior ensemble performances. Supported from the outset by the City of Budapest and the Hungarian Ministry of Culture, it quickly made a name for itself by attracting top conductors and soloists, and thanks to its proactive policy of recording and touring internationally.

Following the examples set by István Kertész and Claudio Abbado in their respective complete recordings, Iván Fischer presents a Serenade alongside his recording of the Symphony No. 3 . The Serenades, which were the young Brahms’s first works for orchestra, represent a very assured piece of work, where wind instruments are foregrounded against an often pastoral backdrop, accented with hints of folk music. The First is written for a large orchestra, and the Second, dedicated to Clara Schumann and present on this album, was written for a chamber orchestra without violins.

The closeness of the young Brahms to the Schumanns is still very evident in the opening theme of the Third Symphony, which sounds like a slightly modified echo of the beginning of Robert Schumann’s ‘Rhenish’ Symphony, something that few commentators have really remarked upon. Iván Fischer gives a rather melancholic reading of the Symphony No. 3, particularly the Poco allegretto which has been made popular in cinema and song, most notably by Yves Montand and Serge Gainsbourg. The final Allegro, on the other hand, launches into joyous tumult and ardour. It seems unstoppable, and then dissolves into thin air, as this splendid symphony closes in a disconcerting pianissimo that is very rare for a romantic symphony.

This recording concludes Montana the complete recordings of Brahms’s symphonies by Iván Fischer and the Hungarian orchestra, of which he has been artistic director since its debut in 1983. Golden colours and an Austro-Hungarian style that fits Brahms perfectly combine to make this a most exciting series.