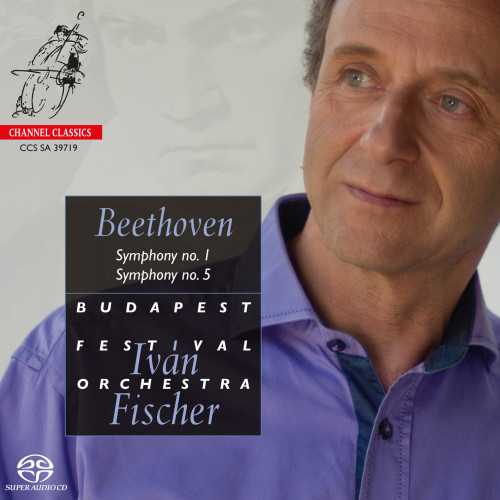 This album represents the important journey from the classical to the romantic view of a symphony. The first symphony of Beethoven (although full of his innovative sharp accents and unusual harmonies) follows Haydn’s favourite structure: it takes us from a slow introduction and an energetic opening movement to a humorous finale. With the fifth symphony Beethoven has created a new art form. He takes us from hell to paradise, from tragedy to jubilation. The mature Beethoven is a revolutionary agitator, who wants to change the world and introduce us to an all-embracing euphoria. I have had many concerts of this work in which the doors opened at the transition to the 4th movement and the Budapest Festival Orchestra was joined on stage by local musicians, music students, turning the last movement into a giant flash mob. The romantic symphony, of which the 5th is the first and the greatest masterpiece, is a future vision of happiness, fraternity and complete freedom. We need this message today, more than ever.\

Beethoven’s First Symphony, though rooted in his classical examples Haydn and Mozart, was nothing less than a turning point in the symphonic tradition and can be seen as a fitting farewell to the eighteenth century, as an exploration of new horizons, and as an energetic statement conceived so as to surpass his esteemed predecessors. (…) The Fifth Symphony is the ultimate proof of Beethoven’s immortality. For who does not know the world-famous theme? Short-short-short-long. According to his friend and first biographer Anton Schindler, these first bars signify fate knocking at the door. He records that the composer told him: ‘I will grasp fate by the throat’. (from: liner notes by Clemens Romijn)