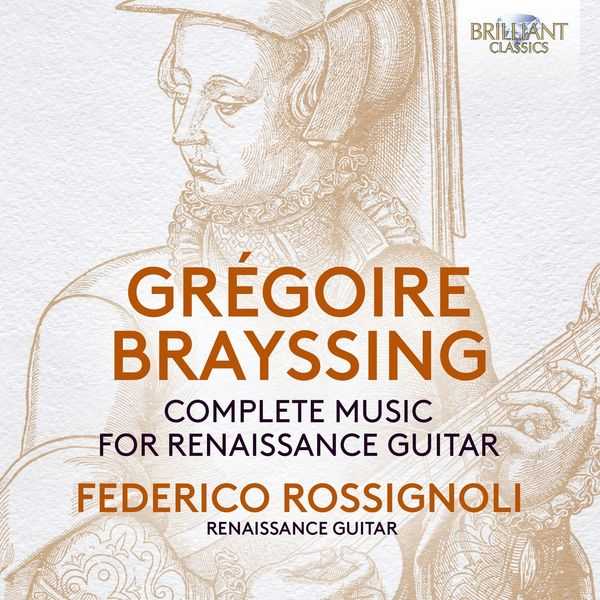 As with many composers from the early modern period, very little is known about Grégoire Brayssing. This recording features his only surviving work, printed in Paris in 1553 as the fourth volume in a series dedicated to the guitar published by Adrian Le Roy and Robert Ballard. Brayssing’s collection provides us with a few clues about his life: the frontispiece describes him as “de Augusta”, meaning he was born in the German city of Augsburg.

The Quart livre, despite containing only 20 pieces, is a pre-eminent example of writing for renaissance guitar, on a par with the works of Alonso Mudarra and Miguel de Fuenllana. It includes six short (some very short) contrapuntal fantasias, true gems of the repertoire, which showcase the composer’s ability to take full advantage of the instrument’s technical and expressive resources, including the fourth course with two strings in octaves, which the upper voice uses on more than one occasion. This device is employed throughout the book, but without ‘strangling’ the instrument, as happens in Fuenllana’s works.

The psalms are next, expertly crafted and ornate, with Brayssing’s arrangement in a lower key of the first part of the motet In exitu Israel by Josquin des Prez a particular highlight. The composers of the other psalms are not known.

The book continues with six chansons from leading composers of the time (Jean Maillard, Sandrin, Boyvet, Jacques Arcadelt and Mathieu Sohier) and a frottola, the famous O passi sparsi by Sebastiano Festa, all intabulated in the same manner as the psalms that precede them. Concluding the book are two long and intriguing compositions, completely unlike anything else in the repertoire: L’Alouette and La Guerre, faitte à plaisir. The title of the former turns out not to be a transcription of Clément Janequin’s famous work, but an original composition by Brayssing.

The sixth of the fantasias can also be found arranged for lute under the title Recercar Salominis in a Swiss manuscript compiled in Germany in 1563. The rarity of crossover in the repertoire of the lute and renaissance guitar is testament to the extraordinary prestige that Brayssing’s work enjoyed at the time.