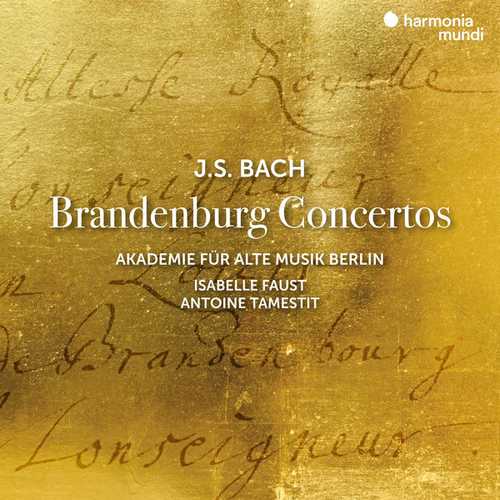 Buoyancy, elegance, crisp rhythmics, precise articulation, bristling timbres… All modes of description that I’m likely to have at some point used to outline the strengths of a Bach Brandenburgs release, when not only do new recordings of this famous Köthen-composed set appear with a steady regularity, but when there’s also a consistency to both the performance standards, and the performance style and decisions that you’ll hear across especially the more recent offerings. Not because Historically Informed Performance ensembles have no imagination, but because Bach was in fact incredibly precise about what he wanted, meaning very little has been left to the imagination. Also because Baroque performances these days are all able to draw on the received wisdom of what is now decades of HIP scholarship and practice.

All that said, this new offering from the Akademie fűr Alte Musik Berlin under its concertmasters Georg Kallweit and Bernhard Forck, feels different. For starters it’s different to the ensemble’s earlier Brandenburgs recording, which now is almost twenty-five years old. Partly this is down to tools, when a quarter of a century ago the instrument-making world hadn’t quite caught up with period performance no longer being a niche enterprise, meaning fewer high-class period copies to be found, and thus more mediocre instruments sitting in the world’s baroque bands. Then it’s also partly due to a change in the continuo department, because this time there’s no double bass – a reflection of the belief that, at time of composition, the “violone grosso” was yet to arrive in Köthen.

Yet it’s not just a matter of lighter continuo textures or an orchestra of top-drawer instruments. Or even of the range of light and shade the orchestra are bringing to their colouring. More, it’s the sense of joyous intimacy and excitement radiating from absolutely everyone, combined with the sheer effortless of the virtuosity you’re hearing at every fresh turn. No doubt this is due in no small part to the presence of the ensemble’s longtime collaborator, violinist Isabelle Faust, and its recent new collaborator violist Antoine Tamestit; because while theirs are hardly “prima donna” star turns (after all, these are democratic, multi-instrument concertos, and Faust and Tamestit have correspondingly submerged themselves into the ensemble), it’s also true that Faust’s solo pyrotechnics in No. 4, and her lovely interplay with the recorders, had me wanting to rewind; and that No. 6 for two violas, two gambas and obligato cello is especially ringing with tonal beauty and sprightly vim. What’s more, the aforementioned lack of double bass has yielded a concluding Allegro for No. 6 that stands as one of the set’s absolute highlights: notably warmly climactic and uplifting, but equally notably light of tread and transparent of texture in a way that’s strikingly, surprisingly successful.

Worth emphasising also is that the sense of occasion is by no means limited to where Faust and Tamestit have their solo turns. For instance, I can’t remember having ever been so captivated by the tonal beauty and shaping of the harpsichord’s virtuosities in No. 5’s opening Allegro as I am here by Raphael Alpermann’s glittering figures.

In short, don’t hesitate. This is superb from start to finish.