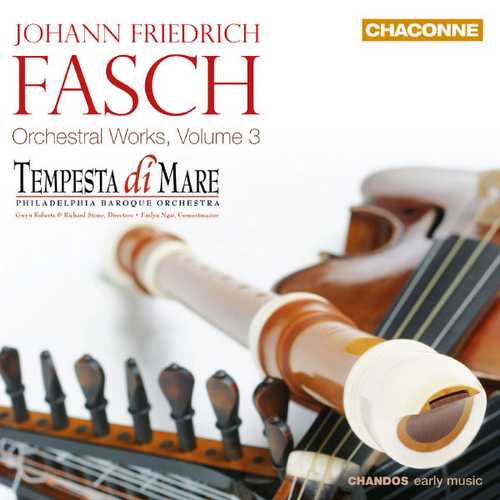 This is the third and concluding volume in Tempesta di Mare’s series of orchestral works by Johann Friedrich Fasch, a contemporary of J.S. Bach and Telemann. In his day, the works of Fasch – cantatas, concertos, symphonies, and chamber music – were performed extensively across the German-speaking world, and Fasch was held in great esteem by Bach, who owned copies of six of his orchestral suites and arranged at least one of his trio sonatas for organ.

Fasch, perhaps more than any other composer of the age, marks the transition from baroque to early classical. He was an initiator, and his music broke the mould of the fugal style in favour of thematic development, which became the basis of classical and romantic writing. Richard Stone, co-director of Tempesta di Mare, describes the works of Fasch as ‘fantastic, true discoveries… they have the breadth and complexity of J.S. Bach without the austerity, and have a much more evolved sense of orchestral colour that is truly extraordinary’. The works on this disc were recorded live in concert at the Presbyterian Church of Chestnut Hill in Philadelphia, Pennsylvania, US.

The Concerto in D major, FWV L: D8 highlights Fasch’s deep understanding of how a solo violinist can impress an audience when surrounded by the right combination of instruments, in this case pairs of woodwinds as well as strings. The Konzertsatz in F major, FWV L: F4 bears the hallmarks of the galant style, which paved the way for pre-classical composers such as C.P.E. Bach, while the Ouverture in F major, FWV K: F1 comprises an engaging collection of early eighteenth-century dance music, guaranteed to put a smile on the faces of performers and listeners alike.

Tempesta di Mare, Philadelphia Baroque Orchestra, performs baroque music on baroque instruments with what the Philadelphia City Paper describes as ‘zest and virtuosity that transcends style and instrumentation’. Under its directors, Gwyn Roberts and Richard Stone, and concertmaster, Emlyn Ngai, the ensemble performs a repertoire ranging from staged opera with full orchestra to chamber music. The group performs without a conductor, as was the practice when this music was new. Tempesta di Mare has been recording exclusively for Chandos since 2004, to worldwide popular and critical acclaim.