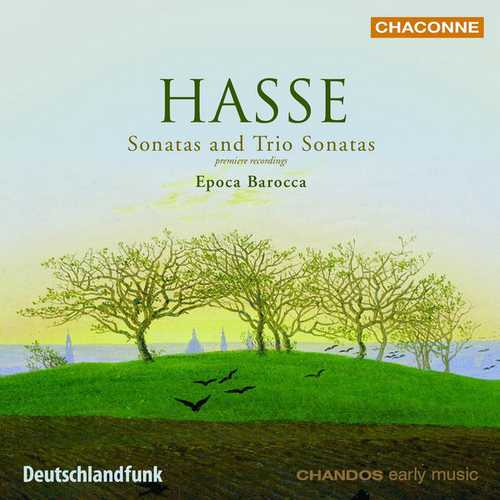 Hasse: Sonatas and Trio Sonatas represents the maiden voyage for decade-old period instrument ensemble Epoca Barocca on the Chandos label. For the occasion, Epoca Barocca has elected to perform six previously unrecorded chamber works of late Baroque composer Johann Adolf Hasse, which have scrupulously been sought out in manuscripts and early prints canvassed from the libraries of Europe. Hasse’s own library of compositions perished in a fire during the bombardment of Leipzig by forces under Frederick the Great in 1760, so in Hasse’s case it is hard to know where the good stuff is and how much of it is left. Epoca Barocca is to be commended for making this effort, and its interpretation of this music is top drawer.

The music itself, however, bounces along happily from piece to piece, decoratively ornamented and of trifling content. “Tafelmusik” it is, but Hasse brings nothing to the table, and comparatively it has none of Georg Philipp Telemann’s seemingly inexhaustible fount of imagination. These sonatas are so lightweight that if the music were the man, he could get his butt kicked by any one of the sons of Johann Sebastian Bach with one hand tied behind their respective backs. Hasse: Sonatas and Trio Sonatas is like musical parsley.

The performances are quite outstanding, and one can imagine a better review written elsewhere — certainly, programmers at many NPR affiliates will go nuts over this disc. In Hasse’s defense, it should be stated that sacred choral music by the composer is substantive. In the case of these sonatas, however, it is nice music, but emotionally empty, and a good way to describe it would be to borrow a phrase from composer Sandra Tsing Loh — “depth takes a holiday.”