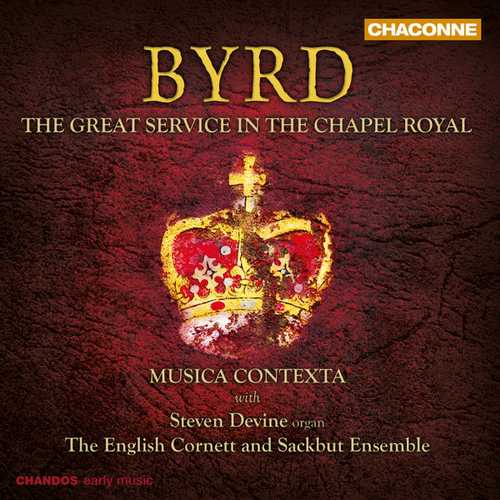 Second Preces and Psalms
03. Psalm 114: When Israel came out of Egypt

06. Sing Joyfully unto God Our Strength

First Preces and Psalms
12. O clap your hands together, all ye people

Musica Contexta translates literally as ‘music interwoven’, reflecting the group’s primary aim of presenting Renaissance music in the context of its original conception and function. They are joined on this recording by The English Cornett and Sackbut Ensemble and the harpsichordist Steven Devine.

The Great Service, consisting of settings of liturgical texts for Matins, Communion, and Evensong, is among the finest music by William Byrd for the Anglican Church. He wrote this grand-scale work for two five-part choirs who, for added contrast, would sing their respective parts facing each other from either side of the church. The size of the choir was used not so much for volume or declamatory effect, as for an extraordinarily rich variety of vocal textures and sonorities.

As well as constantly changing the combination of voices, Byrd was exceptionally inventive in countless other ways, for example by varying the phrase lengths and rhythms, by throwing in unexpected harmonies, and by repeating lines in ever more elaborate ways. The endless variety with which Byrd played with the available combinations gives the Great Service a kaleidoscopic character, which is very rare in late Renaissance music.

The Great Service is a prime example of how the written music only partially plots a Renaissance composer’s intentions for interpreters of today. It is the nature of Renaissance music, as it was written, deliberately to encourage different approaches. In the words of Simon Ravens, the Music Director of Musica Contexta: ‘That which we might consider frustratingly vague, they thought of as an open embrace of the broadest possible church of performers.’

He continues: ‘And although our performance resonates with thoughts of the Chapel Royal, we have not attempted to tie this recording, taken as a whole, to any particular occasion or place: the evidence for us to reconstruct any such event simply does not exist.’ It has been suggested, however, that the whole work may have been written for the fortieth anniversary in 1598 of Queen Elizabeth’s accession.