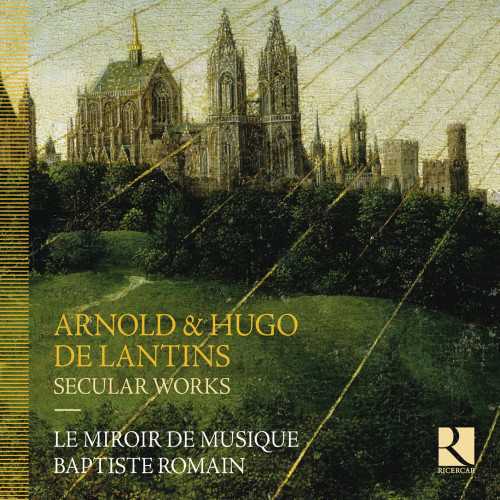 The composers Arnold and Hugo de Lantins were natives of the diocese of Liège, but it was in Italy, principally in Pesaro and Venice that their presence is confirmed between the years of 1420 and 1430. As with the works of Johannes Ciconia, a fellow native of Liège whose time in Italy had preceded theirs, their secular and sacred compositions are preserved in manuscripts copied in Italy. Closely rubbing shoulders with their illustrious contemporary Guillaume Dufay, the Lantins brothers combined archaic traits with the earliest characteristics of the Renaissance. Le Miroir de Musique presents a large selection of French and Italian chansons which enriches our view of the cultural sophistication of the Italian courts at the start of the 15th century.

An introductory note by Jérôme Lejeune

“The De Lantin brothers were both born in Liège and were active as composers during the beginning of the 15th century; RICERCAR had already devoted a CD (RIC207) to the works of one of the brothers in 2002. The Capilla Flamenca under the late Dirk Snellings presented the Missa Verbum Incarnatum by Arnold De Lantins, an important milestone in the history of music as it was possibly the first cyclic mass.

We now feature the works not only of Arnold de Lantins but also of his brother Hugo in a programme of their French and Italian chansons and canzone. The brothers were active in Italy, principally in Venice and Pesaro, where they were part of the highly refined style predominant there at the beginning of the 15th century; this was a period of transition between the archaic mediaeval style and the humanist and expressive style of the Renaissance.

The path to Italy had been laid down by another Liège-born composer several years earlier, one Johannes Ciconia; musicologist now acknowledge that Ciconia played a leading role in the creation of what would become the new musical structures of the Renaissance. Ciconia’s complete works have been recorded by La Morra and Diabolus in Musica for Ricercar on RIC 316.

What, however, caused these men from Liège, soon followed by other Flemish and French composers, to travel to Italy? Although some of these were priests and would have had a practical reason for their journey, travelling to Rome to speed up their requests for the granting of ecclesiastical endowments or prebends, they would in general have been attracted by the artistic development and refinement of the Italian courts. It is interesting to note that the French language was associated with high culture at that time, possibly as a result of Petrarch’s time spent in Avignon; this explains the many works of his that are set to French texts. Hugo de Lantins, however, seems to have had a rascally side, as can be seen by the acrostic (words formed by the initial letter of each line) of the rondeau Plaindre m’estuet de ma damme jolye, as it reads « putain de merde » (FILTHY WHORE); we may well wonder who the damme jolye or fair lady was that caused Hugo to insult her so.”