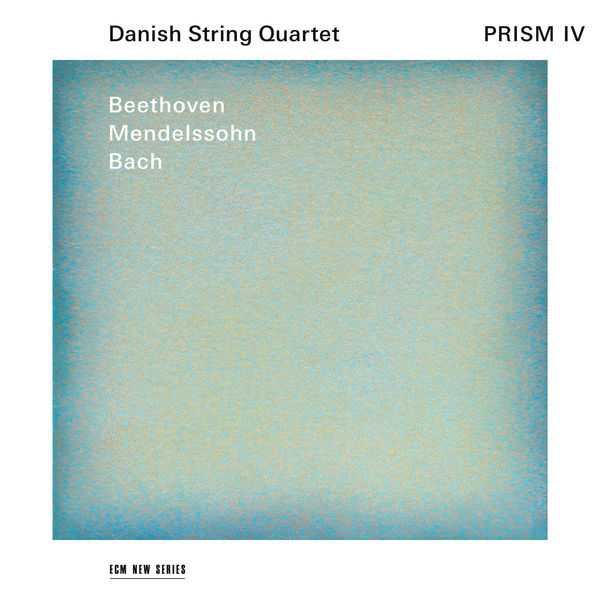 This is the Danish String Quartet’s fourth instalment in the Prism series, the group’s ongoing project that will ultimately hold five volumes of recordings linking Bach fugues with Beethoven quartets and quartets by alternating later composers. While the preceding volumes presented quartets by masters who lived to experience the 20th century – these being, in order of their appearance in the series: Dmitri Shostakovich, Alfred Schnittke and Béla Bartók – Prism IV finds the Danish musicians interpreting Felix Mendelssohn’s (1809-1847) String Quartet No. 2. As Paul Griffiths remarks in the liner notes, the quartet’s interpretation of Mendelssohn is empowered by Beethoven’s model in terms of “vivid gesture, contrapuntal energy, harmonic boldness and formal innovation”. The piece is paired with Beethoven’s String Quartet No. 15 and Bach’s Fugue in G minor, BWV 861 in the arrangement of the Austrian educator and composer Emanuel Aloys Förster.

Praised by The New York Times for “playing of unusual, and unusually effective, liberty” and a tone that “throbs with joy”, The Danish String quartet have built a reputation for their unique interpretations of both traditional and contemporary repertory, often opposing contrasting material and idioms within a programme. The group’s violist Asbjørn Nørgaard has explained that in the past, the quartet members had become “slightly bored with much of the classical music programming. Too much randomness, too little connection.” As they attended a back-to-back performance of Wagner’s Prelude to Lohengrin and Ligeti’s Atmosphères, interpreted by the Berlin Philharmonic under Sir Simon Rattle, they came to a collective realization that ultimately gave birth to the idea for the Prism concept: “connecting masterworks” and “creating a completely new framing but with elegance and respect”, as Nørgaard puts it.

In his liner essay, Paul Griffiths traces different connections between these pieces and their composers – motif-based between Bach and Beethoven, and broader, yet also more immediate ties connecting the latter’s composition to Mendelssohn, who created his Quartet only months after Beethoven’s passing in 1826. “Mendelssohn at this point probably knew all five of Beethoven’s late quartets and certainly was aware of the last, still unpublished when, in July 1827, he began the response that was to occupy his next three months. It was in the finale of Beethoven’s Op. 135 […] that he found his starting point, similarly a question. Keeping the rhythm and contour of Beethoven’s “Muss es sein?”, he narrowed its intervals in his own “Ist es wahr?”, which he drew from a love song he had jotted down the month before”. Elsewhere in his piece, however, Mendelssohn closely follows the model of Beethoven’s Op. 132, down to elegant imitations of its most central themes.

Mendelssohn’s Quartet abounds in references, alluding to, at times even imitating Beethoven’s tonal organization and use of contrast, though each nod to Beethoven also reveals a step towards a different direction, as Mendelssohn’s String Quartet offers alternative answers to old questions. In the same vein, Beethoven’s motif development in the first movement of his String Quartet in A minor proves deeply informed by Bach’s Well-Tempered Clavier, though it is not the head motif of the Fugue in G minor, but that of the C-sharp minor Fugue, to which the American musicologist Lewis Lockwood has drawn parallels.

The Danish String Quartet’s interpretation of the G minor Fugue – one of Bach’s best known fugues and occasionally referred to as the “Little Fugue” – leads gracefully into Beethoven’s String Quartet, confirming the quartet’s claim that “Beethoven is not a disconnected island in music; it is a continuation from Bach and the old masters”. Mendelssohn continues the lineage.