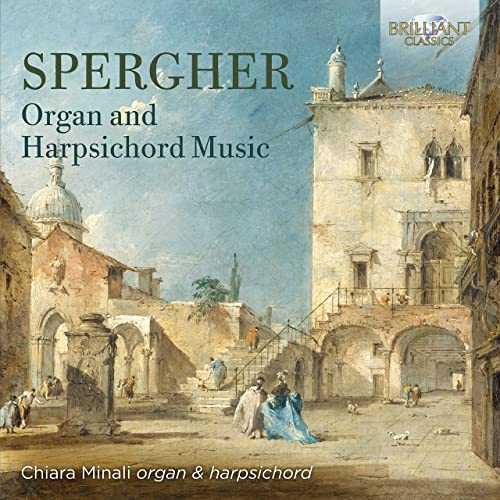 61. Pastorale in A major

First recordings of sonatas for organ and harpsichord by a forgotten Italian composer on the cusp of the Baroque and Classical eras.

Ignazio – or Ignaz, in some sources – Spergher was born in 1734 in the northern Italian town of Treviso. There, by and large, though even before his death in 1804 his music had crossed national boundaries to delight audiences across Europe. As chapel master and then organist at the city’s cathedral in the late 1700s he produced an output of vocal and instrumental music, most of which was destroyed when the cathedral’s library was burnt down during air raids in 1944.

There remain, however, the six Op.1 Sonatas published in Venice in 1786 with which Chiara Minali begins her survey of Spergher’s surviving music, the most comprehensive yet. These are three-movement pieces written in the Venetian organ tradition of the 18th century. The manuscript of his Op.6 sonatas for harpsichord avoided the Chapter House holocaust by having been sent to Vienna in 1845, and then Minali completes the set with assorted sonatas from different sources, all of them attesting to Spergher’s lively invention.

Chiara Minali’s previous work for Brilliant Classics includes the complete organ sonatas of Benedetto Marcello: a 3CD set (BC95277) that was warmly welcomed in the Italian press for Minali’s lively sense of style, beautifully sprung rhythmic
playing and lively choice of registration on a historically appropriate instrument.
On this recording she plays an organ made by Antonio Zanchi in the 18th century for the parish church of Paderno di Ponzano in the Veneto region which was Spergher’s home. The harpsichord sonatas were recorded on a modern copy of a 17th-century model in the Oratory of St Elizabeth in Verona.

Ignazio Spergher (1734-1808) spent his entire life in his native town Treviso, where he was a highly respected singer, keyboard player, teacher and composer, a pupil of the great theorist Giordano Riccati.
This 3CD set presents Spergher’s keyboard music, for both organ and harpsichord. The 6 organ sonatas Op. 1 are delightful works in classical/galante style, written in 3 movements fast-slow-fast. The fast movements contain contrasting episodes of “Tutti” and “Concertino”, whereas the slow movements abound in sweet cantilene melodies entrusted to the “vox humana” register.
The works for harpsichord are charming pieces used as “Hausmusik”, in the pleasing Venetian style of Galuppi and Luchesi.
Played on the Bazzani-Aletti-Zanin organ of the Parish Church of Paderno (Treviso) built in 1903 by the Aletti brothers, embodying much of the earlier 1845 Bazzani organ. The harpsichord used is a copy of a Giusti instrument of 1681, made by Roberto Mattiazzio. The specifications of the instruments are included in the booklet.
Chiara Minali previously recorded organ works by Benedetto Marcello for Brilliant Classics.