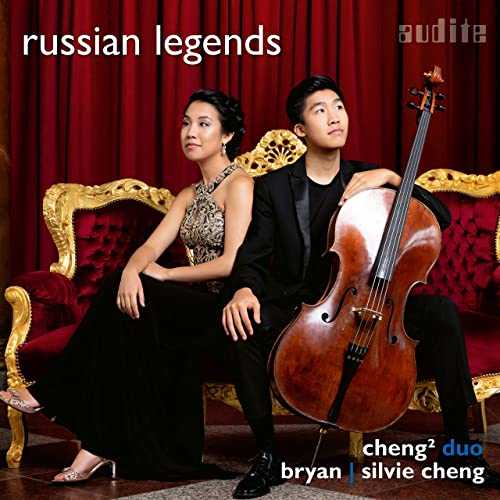 10. Tchaikovsky: Pezzo capriccioso in B Minor, Op. 62 (version for cello and piano)

After forays to Spain and France, the Cheng2 Duo ventures to Russia for their third audite album.

The “Süddeutsche Zeitung” described Bryan and Silvie Cheng’s last CD, dedicated to Spanish music, as an “event of austere and severe, but also dreamy beauty”, and praised the siblings’ interpretation for “finding the correct idiom which manages to raise the temperature”. Their new double album centres on the three great sonatas for cello and piano by Dmitri Shostakovich, Sergei Rachmaninov and Sergei Prokofiev. The Cheng2 Duo contrasts these with a series of shorter pieces by Anton Arensky, Piotr Ilyich Tchaikovsky and Alexander Glazunov. This comprehensive programme represents a short history of Russian cello music which began with the foundation of the great music conservatoires in Saint Petersburg and Moscow in the middle of the nineteenth century.

Cellist Bryan Cheng is hailed internationally for his “absolutely astonishing” (La Presse, Montréal) command of the cello, and “abundant facility, innate musicality, and sense of joy” (New York Concert Review). He made his solo debut at age 10 with the Orchestre de chambre I Musici de Montréal, his Carnegie Hall recital debut at 14, and most recently, his Elbphilharmonie solo debut with the Deutsche Kammerphilharmonie Bremen and conductor Joshua Weilerstein in 2018.

Lauded for her “extraordinarily varied palette” (WholeNote Magazine) and “purely magical” playing (New York Concert Review), pianist Silvie Cheng illuminates musical works with her exquisite touch at the keyboard. Since her Carnegie Hall solo debut in 2011, she has performed as both soloist and collaborative pianist across the globe. As guest soloist with orchestra, Silvie most recently made her debut with the New Amsterdam Symphony Orchestra in 2018 and will debut with Symphony Nova Scotia in the 2019-20 season.