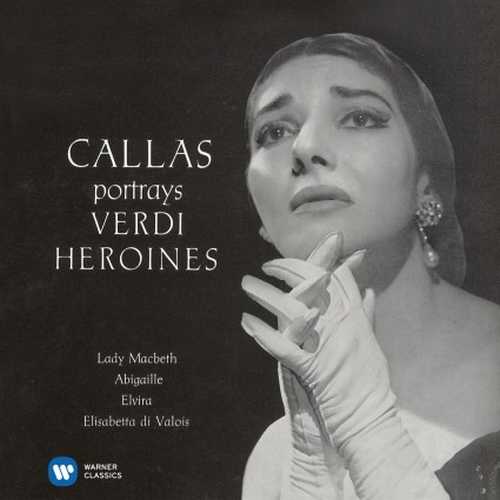 Maria Callas’s recital discs occupy a central place in her recorded legacy, alongside her complete opera recordings. The Verdi featured three roles she had sung in the opera house: Abigaille, brimming with youthful and impressive vocal grandeur at the San Carlo in Naples in 1949 (her earliest complete live opera recording to have survived); Lady Macbeth at the opening of the 1952–3 La Scala season, one of her greatest triumphs (the live recording was reissued by EMI); and Elisabetta (Élisabeth de Valois) at La Scala in 1954 (of which we have no recording), a character whose aria ‘Tu che le vanità’ would become a central feature of the concerts she gave between 1959 and 1962.

The remaining role, Elvira from Ernani, she never sang on stage but the aria included here, a mix of drama and sheer enchantment (note her admirable breath control in the cabaletta) was another of Callas’s favourites at the time, performed in concert in Amsterdam in 1959 (recording issued by EMI), Brussels, Bilbao, Berlin, Munich and so on. The genius of Callas, whom Luchino Visconti considered the greatest tragic actress since Eleonora Duse, meant that she could create as much dramatic tension in recital or in the studio as she could on stage, as any comparison between this album and the recordings of her stage performances will prove to magnificent effect.