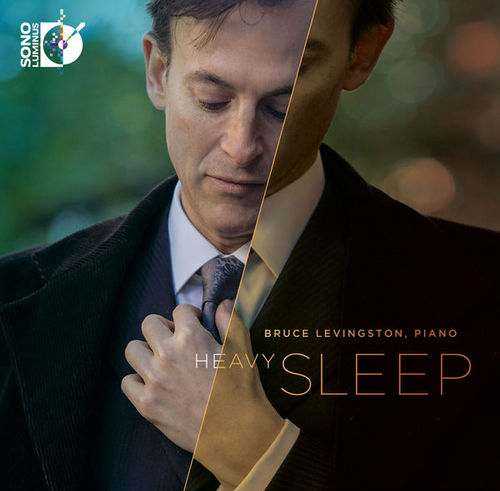 Mohammed Fairouz:
El malei rachamim
09. I. God, full of mercy
10. II. I, who pluck flowers from the hilltop
11. III. I, who brought corpses from the mountains
12. IV. I, who use but a tiny portion of the words in the dictionary
13. V. I, who am forced to decipher riddles

The title “Heavy Sleep”, is meant to reference not only the eponymous opening work on this Album, but also to note the phrase’s allusion to death and eternal sleep. For me, each work on this album relates either directly or spiritually to the theme of death, rebirth, or both. Voices of other composers or allusions to their own or others’ works are also found throughout these pieces, often appearing as subtle homage to composers of the past: In the Andres work there are echos of both Bach and Chopin; in the Fairouz a direct tribute to Ligeti; in the Kurtag, Reger and Siloti arrangements there are reflections on Bach through the art of transcription; and in the original works of Bach himself, particularly in the great B minor Fugue, symbolic voices of God and man. Together, these works offer a touching perspective to the close spiritual connectivity we all share as artists and as human beings, culture to culture, past and present.

Pianist Bruce Levingston is one of today’s leading figures in contemporary music. Many of the world’s most important composers have written works for him and his Carnegie Hall and Lincoln Center world premiere performances of their works have won notable critical acclaim. The New York Times has called him “one of today’s most adventurous musicians” and praises his performances as “graceful”, “dreamy, and “hauntingly serene.” The New Yorker has described him as “elegant and engaging… a poetic pianist who has a gift for glamorous programming,” while The Washington Post has lauded his “wonderfully even touch” and “timeless reverie, which Levingston projected beautifully.” Timo Andres is an acclaimed composer and pianist. The New Yorker writes that Andres achieves “ an unhurried grandeur that has rarely been felt in American music since John Adams came on the scene.” Amongst his recent compositions, Andres has composed a piano quintet commissioned and presented by Wigmore Hall, Carnegie Hall, the Concertgebouw Amsterdam and San Francisco Performances; a solo piano work commissioned by the Gilmore Foundation; and a new string quartet for the Library of Congress. Heavy Sleep was composed especially for Bruce Levingston and commissioned by Premiere Commission, Inc. Timo Andre’s title, Heavy Sleep , is derived from the haunting poem “Nocturne’ by the Swedish poet Tomas Tranströmer. The other world premiere, El Male Rachamim by Mohammed Fairouz is a touching tribute to Ligeti, from one of his last pupils. Fairouz notes: “ El Male Rachamim (God, full of mercy) takes its title from both the poem by Yehuda Amichai and the litany that inspired it. The Jewish funeral prayer recited by the hazzan accompanies the ascension of the soul and is used to evoke the memory of the deceased. It’s cast in five sections that flow continuously with little pause. “

The tension is released with the lyrical but bittersweet second movement called “I, who pluck flowers from the hilltops”; this movement conceals, in the composer’s words, “an inner crying.” The composer describes the third movement, “I, who brought corpses from the hilltops”, as a “ full-on dance of death.” Like the Siloti-Bach Prelude, its figurations in both hands play equally important roles to create a canvas of breathless, unrelenting drive and emotion.