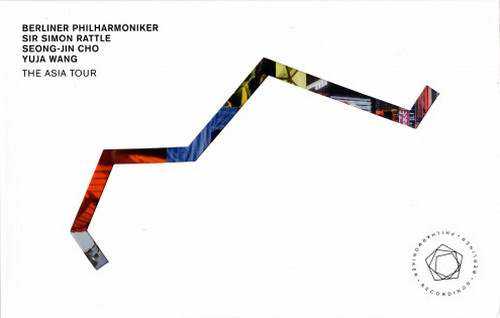 In November 2017 the Berliner Philharmoniker embarked on a Far Eastern tour, giving concerts in Hong Kong, mainland China, South Korea & Seoul. This set of recordings, presented on the orchestra’s own label in their usual lavish style, commemorates that tour. The trip had a double significance: it marked 60 years since the orchestra’s 1st tour to the region & it was their last visit to the Far East with Sir Simon Rattle as Chief Conductor. The set is, therefore, rather more of a souvenir issue than previous releases on the label. The hardcover book is lavishly illustrated with colour pictures from the tour & there’s also an essay by Tobias Möller about the orchestra’s touring history in the region.

Blog of the tour:
One detail that especially caught my eye in Mr Möller’s essay was that when the orchestra 1st embarked to Japan with Herbert von Karajan in 1957 there were no direct scheduled flights from Germany to Japan. As a consequence, the orchestra chartered 2 aircraft, which flew to Japan following different routes. These were propeller aircraft & the orchestra was deliberately divided between the 2 ‘planes so that in the event of a crash the entire orchestra would not be wiped out. How times change!

These SACDs preserve in their entirety the 2 concerts in Suntory Hall, Tokyo. These were the concluding concerts of the 19-day tour; both of the tour programmes were played & as Sir Simon comments in the documentary film, these concerts were “a proper climax” to the tour.

The 1st of the 2 concerts began with Don Juan by Richard Strauss. This is not a work that Rattle has previously recorded, to the best of my knowledge. It was included in Karajan’s repertoire for the 1957 tour so it was a nice touch to reprise it 60 years later. Rattle leads an excellent performance. The music sparkles at the start, the fight with Don Pedro is suitably swashbuckling – even if we know it was 1-sided – & the poignant ending is very well done. The 2 love scenes are especially memorable, the BPO’s playing sensitive & seductive. The Chinese pianist Yuja Wang joins the orchestra for the Bartók concerto. The 1st movement is played with scintillating virtuosity by all concerned. The start of the 2nd movement is breathtakingly hushed, the Berlin strings showing amazing dynamic control. Wang matches their delicacy at 1st, though a little later, mirroring the forceful timpani, her playing has great power. The central scherzo-like episode scurries along. In the bravura finale Wang plays with terrific virtuosity, her technical prowess matched at every step by Rattle & the orchestra. Her selection of the Rachmaninov Vocalise as an encore is an inspired choice since it lowers the temperature & also allows her another opportunity to display the sensitive side to her pianism.

Rattle closed this concert with the Brahms 4th symphony. Back in 2008, when he was still recording for EMI, he recorded a live Brahms symphony cycle with the Berliner Philharmoniker, which I admired. Here, the 1st movement is marvellously played, as you’d expect, yet for some reason that I can’t quite identify the music doesn’t quite seem to take flight until the last couple of minutes; other listeners may hear it differently. Thereafter, the performance worked much better for me. The slow movement, played with great finesses, is lovely & here I especially admired the BPO’s wind choir. The short 3rd movement is dynamic, after which Rattle begins the finale very powerfully. The central section, led off by the flute variation, sounds deliberately drained of colour. The return of the full orchestra is a moment of grandeur after which the movement is played out in a trenchant fashion. For his encore, Rattle chose 1 of Dvořák’s Slavonic Dances. The performance is light & affectionate, the music proving to be the perfect foil to the intellectual rigour of Brahms’ finale.

The 2nd concert opened with Petrushka. Here, Rattle opts for the 1947 version of the score, as he did in his vibrant & colourful CBSO recording, made as long ago as 1986. That was a very fine recording & I wasn’t surprised to discover that my colleague Simon Thompson liked it a lot. This new account with the Berliner Philharmoniker is superb from start to finish. The performance is brim-full of colour & character. It seems to me that Rattle establishes immediately & maintains a strong narrative thread & his magnificent orchestra invests the music with an abundance of light & shade. Rhythms are consistently taut, although Rattle allows plenty of flexibility from soloists when it’s needed in order to make expressive points. Among a host of superb instrumental soloists, the principal flute & the pianist deserve special praise. This is, quite simply, 1 of the finest recordings of Stravinsky’s great ballet that I can remember hearing & it reminded me why I love the work so much.

Chorós Chordón was commissioned by the orchestra specially for this tour from the Korean composer, Unsuk Chin, who now lives in Berlin. It received its premiere in the Philharmonie a few days before the tour began. Chin relates that back in the 1980s she sneaked into a rehearsal in Seoul when Karajan & the Berliners were touring because she couldn’t afford a ticket for the concert. Now the wheel has turned full circle & she finds herself feted on this latest tour. The title of the work is an ancient Greek expression which translates as ‘Dance of the Strings’. We learn from the notes that the piece represents “the Universe in a nutshell”. It’s scored for similar forces to those employed in Petrushka. The music includes a lot of busy textures & what seem like fragmentary contributions from all over the orchestra. The music describes a wide dynamic range & includes several ear-splitting climaxes but also many more passages of great delicacy. My presumption is that Chorós Chordón receives a performance of pin-point accuracy from Rattle & the orchestra, but I’m afraid it didn’t do a great deal for me. I’m sure that’s a failing on my part & that others will find much more to admire in the piece.

Rachmaninov’s 3rd symphony is another work which I believe is new to the Rattle discography. It’s been worth the wait. The 1st movement mixes passages of sparkling virtuoso music with episodes of archetypal melancholic yearning. Rattle & his players seem equally attuned to both aspects. The aching nostalgia of the 2nd movement comes across beautifully, the response of the Berlin strings particularly memorable. The central scherzo episode (from 5:17) darts & flickers at 1st & later is played with no little fire. I love the refined way in which the end of the movement, with its shadows & half-tints, is accomplished. There’s a considerable amount of dash in the finale & the lyrical outpourings are just as satisfying to hear. I have the sense that the orchestra was even more than usually keen to show their qualities on this last lap of the tour. Quite possibly that extended to the conductor too, for Rattle whips up the music most excitingly in the last few pages. The Puccini encore was well chosen. At the start we can once again savour the refinement of the BPO’s strings & later the whole orchestra plays with no little ardour.

The tour programmes also included the Ravel Piano Concerto, possibly alternating with the Bartók concerto. However, the audio performance comes from a pre-tour concert back in Berlin. Apparently, this was selected in preference to performances during the tour in order to present the performance in optimum sound. The young Korean pianist, Seong-Jin Cho seems a trifle reserved – an impression I formed before seeing him play on the Blu-ray disc, which confirmed the impression – but technically he’s excellent. The lovely slow movement is played with no little refinement – the orchestral contribution is distinguished – and the finale has plenty of spirit. In that concluding movement there are some uproarious solos from members of the orchestra. Cho’s playing of Debussy’s Reflets dans l’eau is a lovely encore.

The Blu-ray disc offers us the chance to see performances from three of the concerts prior to the Tokyo finale. One point of difference is that while the two orchestral encores are the same as we hear on the SACDs, the pianists chose different pieces. Seong-Jin Cho follows his Hong Kong performance of the Ravel with Debussy’s Claire de Lune, which he plays most poetically. Yuja Wang follows her Bartók performance in Wuhan with Liszt’s over-elaborate take on the Schubert song Gretchen am Spinnrad. Incidentally, during both of these encores Rattle comes onto the stage and sits very unobtrusively at the back of the orchestra to listen. I’ve seen him do this before – but no other conductor that I can remember – and I think it’s a most graceful compliment to his soloists.

I got very good results when listening to the hybrid SACDs in stereo the audio was under the control of producer Christoph Franke & engineers René Möller who have worked on most of the previous sets that I’ve heard from this label. Consequently, the audio side was in very safe hands.

As the Rattle era comes to an end this excellent set offers a very enjoyable memento of the Berliner Philharmoniker’s last Far East tour under Sir Simon’s leadership. It will surely sell like hot cakes in the countries that were visited but it’s just as valuable to other collectors as a reminder of the excellence of the Rattle/BPO partnership.
~ John Quinn