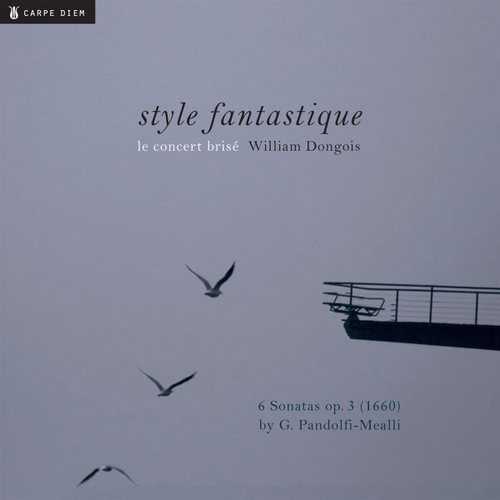 The title of this CD, ‘style fantastique’ or ‘stylus fantasticus’, refers to the development of the renewed improvisatory style which grew, initially in Italy, out of the transition from renaissance to baroque. The disc actually consists mainly of the six ‘Sonate a violino solo per chiesa e camera’, op. 3 (1660) by Giovanni Pandolfi-Mealli, his surname usually listed simply as Pandolfi in the catalogues. Here, however, these sonatas are used as a brilliant vehicle for illustrating the art of baroque improvisation and embellishment – and, what is more, with the lead instrumental part being played on the cornetto of William Dongois.

I’ve already mentioned the word ‘brilliant’, but it’s hard to avoid using it again to describe the astonishing music-making on this recording. For Prof. Dongois is an absolute wizard on the cornetto, and he is most ably supported here by his fellow musicians of the ensemble Le Concert Brisé on harpsichord, organ, and lute or theorbo. The Pandolfi sonatas, built typically around a substantial inner movement on an ostinato bass, not only are spirited and engaging music in themselves, but also provide marvellous opportunities for the inspired embellishments of these musicians. Among many delights, my personal favourite is probably the Sonata La Sabbatina (track 7 of the present disc). Further variety comes in the form of three keyboard works by Froberger, an exemplary master of the art of written composition originating from improvisation. Two of these works, a lamentation on the death of Emperor Ferdinand III and a Toccata in F, are played by Carsten Lohff on a superb original Ruckers harpsichord, recently restored by the Paris studio of Reinhard von Nagel; and the third, the very fine Suite in D minor, is transcribed and played beautifully on the lute by Éric Bellocq.

The outstanding musical and technical excellence of these performers is, if anything, all the more impressive considering that the recording was made live at a series of concerts at Neuchâtel in Switzerland. If you haven’t yet got around to reading about this in the booklet, you only realise it when you hear the applause after the final item. But much more important than that is the feeling of spontaneity and of the adventurous spirit of baroque music-making on this disc – a feature I’ve noted and enjoyed in other recordings from this ensemble (such as Buxtehude Cantatas & Sonatas; La Suave Melodia, both on the Accent label) whether or not they were recorded live.

The booklet notes are thoughtful and enthusiastic, although I could have done with a bit more information about Pandolfi-Mealli and his works. There are also attractive and atmospheric photos, presumably taken at the recording location on the shores of the Lac de Neuchâtel, with due prominence given to musicians and seagulls. In addition to all the qualities I’ve mentioned, and especially for lovers of historic wind instruments, this disc offers us a wonderful demonstration not only of the ‘stylus fantasticus’ of baroque improvisation technique but also – in case we don’t already know – of the sweet-toned clarity and expressive capabilities of the cornetto. Altogether, then, this is a terrific and highly distinctive recording and a real treat for fans of baroque instrumental music.