And If the Song be Worth a Smile. Songs by American Composers (24/96 FLAC) 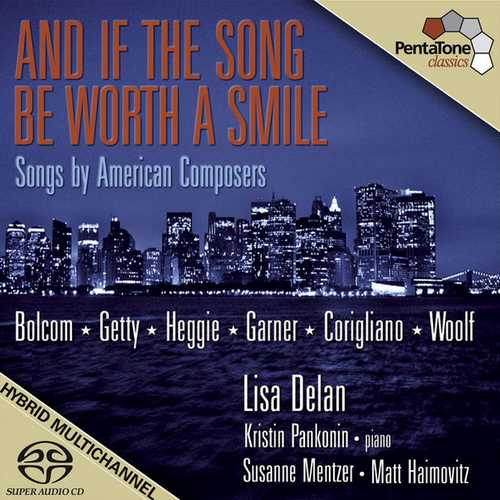 And If the Song be Worth a Smile. Songs by American Composers (24/96 FLAC)

Both the composers and the performers on this release from the Dutch audiophile label PentaTone are mostly associated with the city of San Francisco, but the program is nevertheless diverse enough to live up to the more general “Songs by American Composers” subtitle. The title comes from Gordon Getty’s The Ballad of Poor Peter (track 7), one of several compositions on the program that take their inspiration from folk music. Getty’s set Poor Peter, to his own texts, draws on English folk song, while Jake Heggie’s lush Four Songs include reworkings of three American folk melodies. The Heggie and the opening selections from the rather preciously naughty Cabaret Songs of William Bolcom are the only non-premieres here. Even though she is presenting music by the most varied compositional voices, soprano Lisa Delan holds the program together with a personality that’s strong enough to make you forget the example of Bolcom and partner Joan Morris in the Cabaret Songs and also in John Corigliano’s satirical Dodecaphonia, which was also composed for them. Most of the songs are comic in one way or another, but they’re balanced by the genuinely intense, neo-Romantic Annettes-Lieder of David Garner, setting German-language poems by Annette von Droste-Hülshoff and by the Spanish-language Odas de todo el mundo of Luna Pearl Wolf. The latter work is technically a stretch for Delan, but she’s consistently fun to listen to.