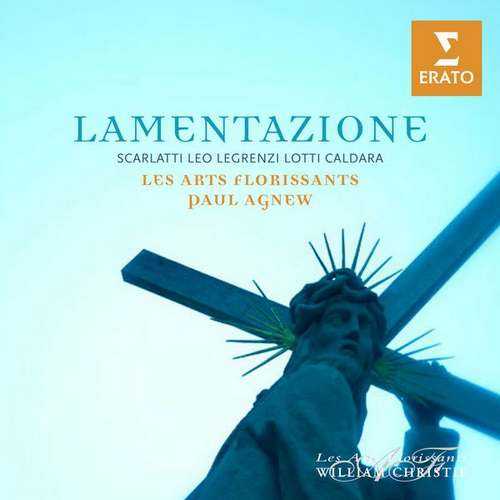 Here’s a beautiful collection of Baroque choral music from a repertory that’s been somewhat neglected, perhaps because its most substantial representative, Domenico Scarlatti’s Stabat Mater à 10, has been transmitted in versions that don’t make a clear performance practice obvious. Lamentazione, or laments for the crucified Jesus Christ, called forth an antique style, with heavy use of polyphony and sometimes polychoral (multiple-choir) textures. Yet the composers represented here didn’t simply write pieces in the Palestrina style: they intensified the old polyphonic idiom with rich chromaticism and expressive dissonances. The model for some of them was Scarlatti’s piece, which was extraordinarily popular in the 18th century. Its ten parts do not divide into two choirs of five, but are put together into constantly shifting groups that add an expressive variety of textures to the work’s rich harmonic language. Some of the verses are reduced to solo voices in other performances, but Les Arts Florissants, under newly deputized conductor Paul Agnew, make a persuasive case here for choral performance throughout: the textures are plenty varied as it is. In the program here variety is provided by the solo performance of Legrenzi’s Quam amarum est, Maria. Crucifixus settings by Lotti and Caldara are similar in texture to the Scarlatti, but the Miserere of Leonardo Leo, elsewhere one of the most progressive composers of the early 18th century, is a full-scale and magnificent reversion to the Venetian polychoral style. It was well known in the 19th century, and even Wagner admired it. But it’s rarely heard nowadays. Les Arts Florissants deploy a 20-voice choir, just big enough to fill the musical spaces involved but small enough to keep the polyphonic moves clear, and their singing, recorded in live performances, is intense and expressive. A very strong Baroque choral release from Virgin Classics.