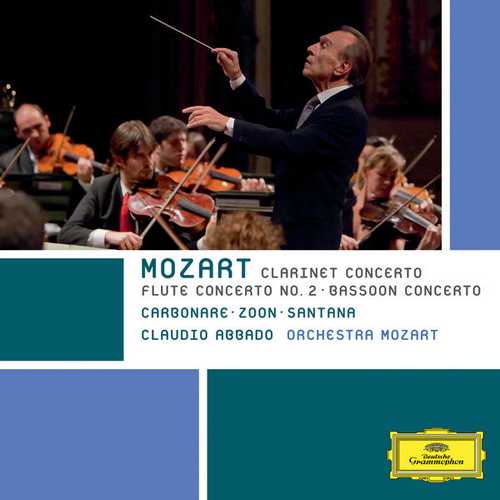 Veteran octogenarian conductor Claudio Abbado has reached an age where he can do what he likes, and he has chosen to release a series of albums of Classical-period music with his hand-picked Orchestra Mozart. It’s a large group, nearly 70 players, and the playing in the three concertos on this release is very much old-school Mozart. It’s also, once you realize what you’re getting into, a lovely thing in many ways. The soloists are the orchestra’s principals, and these are really an orchestra’s concerto recordings rather than the soloists’. Despite the large size of the orchestra, Abbado’s textures are strikingly transparent and graceful, with the wash of brass and winds a pleasure to listen to in itself where these instruments appear. In general he finds plenty of small details in these scores, and in the Clarinet Concerto in A major, K. 622, a work that occupies the listener for a lifetime, the results are profound. The other two concertos are not quite as successful; as so often happens with old-school recordings of these, the music is weighted down with loads that it can’t quite bear. The dense little Bassoon Concerto in B flat major, K. 191, fares quite well; the Flute Concerto in D major, K. 314, loses something of its whimsical French melodiousness in a recording of this size. But Deutsche Grammophon delivers fine sound, working in a pair of small Italian theaters, and in general this will be a recording prized by Abbado fans and old-school Mozart listeners.

In the year of his 80th birthday, Claudio Abbado and his superb orchestra continue their Mozart celebration with critically acclaimed solo concerto performances.

The third of a three album series of Mozart wind compositions puts Claudio Abbado’s inimitable, refined stamp on this music of vigour, grace and beauty. Guilhaume Santana’s bassoon – mournfully and boisterous by turn – exploits every interpretive possibility in Mozart’s earliest surviving wind concerto, the Bassoon Concerto , K. 191. The arcadian chase that is the Flute Concerto No. 2, K. 314 proves an exhilarating and easy conquest of perfection by flautist Jacques Zoon and clarinettist Alessandro Carbonare spins tonal majesty out of thin air in the reflective Concerto in A, K. 622.

The second movement of the clarinet concert is known for its use in famous movie ” Out of Africa ” (1985) by Sydney Pollack (starring Robert Redford and Meryl Streep).