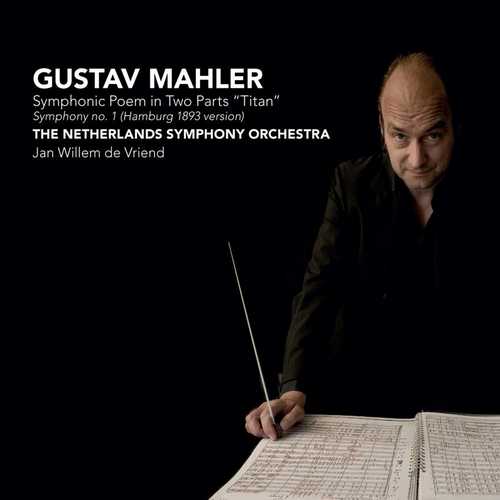 The original version of Gustav Mahler’s Symphony No. 1 in D major was the symphonic poem in two parts called “Titan,” after a novel of the same name by Jean Paul. A comparison with the published symphony shows that this early work is quite close in its musical construction and mostly recognizable in its brilliant, if somewhat heavier, orchestration. It also includes the “Blumine” movement, which Mahler later rejected, but which many modern conductors feel duty bound to restore to the symphony.

But if they enjoy conducting “Blumine” so much, they really should record “Titan” and leave the symphony alone, because it plainly weakens the symphonic structure. In “Titan,” one could make the same claim that “Blumine” is a brake on the work’s momentum, coming so quickly after the energetic first movement and delaying the boisterous Scherzo — only here, the first part is a continuous, if subdivided, whole: Spring and No End, Flowers, In Full Sail — so there is no reason to accept the demands of a symphonic structure in this looser design.

Even so, it is difficult to give “Titan” pride of place over the symphony simply for being the earlier work because it sounds in many passages to be a rougher version of what Mahler later polished and perfected. In this performance by Jan Willem de Vriend and the Netherlands Symphony Orchestra, the inadequacies of the orchestration and its imbalances are all too obvious. Here, Mahler combined sonorities as if thickly applying paint on a canvas with a palette knife, so the effect in many places is too clumsy and bombastic, most noticeably at climaxes.

The passage of a few years convinced Mahler to re-orchestrate many passages to thin out textures and to delete “Blumine,” so the final version is much more transparent and vibrant, even though much of the tone poem’s soundworld is preserved in the published score. Mahler aficionados will find this recording of particular interest, but the majority of listeners will be satisfied with an excellent recording of the symphony and pass by this original version.