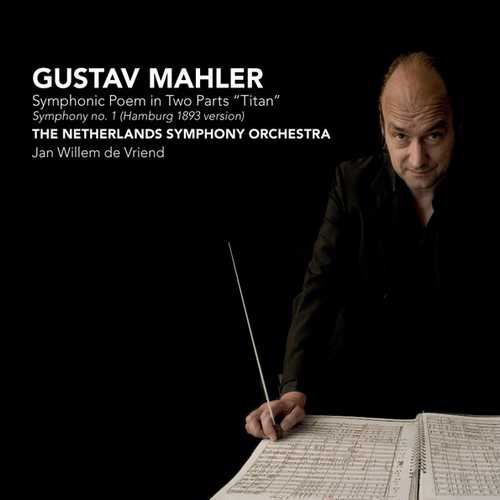 The Netherlands Symphony Orchestra, alongside its illustrious Dutch counterpart The Concertgebouw Amsterdam, has a long tradition of Mahlerian performance. It is here led by its artistic director Willem de Vriend, in a recording of the 1893 “Hamburg” version of Mahler’s first symphony. This version bears the title Symphonic Poem in Two Parts, “Titan”, and includes the later discarded “Blumlein” movement. Jan Willem de Vriend is the artistic director of Combattimento Consort Amsterdam, the highly-rated early music group, and since 2006 the chief conductor and artistic director of the Dutch Symphony Orchestra. The DSO has taken a major role on the Netherlands’ musical scene, it has been involved in premieres of works by Offenbach, Say and Mahler, and by substituting historical instruments in the brass section, it has developed its own distinctive sound in the 18th and 19th century repertoire. Recently orchestra and conductor have embarked on a series of recordings of Beethoven’s complete symphonies.

The first performance of the Symphonic Poem in Two Parts, later his First Symphony, was conducted by Mahler in Budapest on 20 November 1889, and received a cool if not hostile reception. This new recording is of the restored 1893 “Hamburg” version, and is made up of two parts and five movements. Part one, called “From the Days of Youth” contains the first three movements, with the later discarded “Blumlein” movement sandwiched between the first and the Scherzo, and Part two, “The Human Comedy”, consists of the Funeral March and the fifth movement, Finale: From Inferno to Paradise.